Get Rich With: Good Old-Fashioned Trust 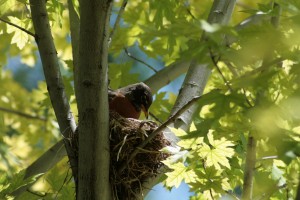 This nest in our front-yard tree has raised five generations of robins. Note this year’s remodel – some shredded strips of one of my credit card statements.

It was the fall of 1992, and the teenage version of Mr. Money Mustache was getting his first peek at a whole new world. The World of the Wealthy.

I was on a date with one of my first-ever girlfriends. She was way too attractive for me, which already induced nervousness. We had been dating for a while, and I guess things were going well because she had decided to introduce me to her Dad, who lived in another town. I was ready for terror and interrogation.

As we drove up the leafy winding road to his private, custom built house, I felt I was entering another league entirely. In my hometown, people didn’t live like this. We walked through the front door and there was her father – a friendly and casual 40-something dude, looking stylish in his faded jeans and sporting a bushy Tom-Selleck-style black Mustache.

The vibe was completely different from any girl’s father I had previously met. Most of the Dads of my town were strict, conventional, and even a bit irrational in setting rules for their daughters. But this man treated both his daughter and her new boyfriend as adults. He was funny and bright. He told interesting stories about the successful photography company he was running. After a bit of chit-chat he gave us a quick run-down of where things were in the house: TV room, hot tub, keys to the fancy car if we needed it. Then he took off to attend a meeting with one of his business partners, leaving us with the whole place to ourselves, for most of the night.

“Wow”, I remember thinking. “This old guy has entrusted me with his daughter, his house full of cool stuff, and his car, after meeting me for all of fifteen minutes. I’ve never seen anything like it!”.  A feeling of fancy adult responsibility washed over me and I made a point of not abusing his trust. We even washed all his dishes that night.

Over the decades that have followed, I’ve noticed that pattern in several more places. Successful people are usually more trusting. Less successful members of the middle class are often obsessed with locking up their houses and cars, suspecting that the world is out to get them, and avoiding risk.

The pattern also seems to apply at the corporate level. The first company I joined after moving to the US had a culture of micromanagement. The employee handbook specified that no personal emails or websites were to cross into the company’s network, ever. The CEO was notorious for second-guessing coding decisions of individual software engineers. Vacation time was closely guarded and merit-based-pay was almost nonexistent. I jumped ship from that job to a better one after only 10 months. The company went out of business shortly after I quit.

The next company was a model of employee trust and fair treatment. I was given a generous budget to buy whatever I needed to get my job done. I could book my own business travel without approval. Working time was not monitored and vacations were self-scheduled and self-reported. I worked much harder at this place, and at the time it was one of the most valuable and profitable companies in the world. (In recent years the employee experience has gone downhill but it is still a profitable and huge company).

Even on the bigger scale of entire countries, it turns out that there is a strong correlation between trust and wealth, and in fact trust precedes and causes wealth in countries as they develop. In an interesting passage of The Rational Optimist, the author noted a 2008 Princeton study on this effect. It found that 65% of Norwegians answered a question indicating that “most people can be trusted”, while only 5% in Peru felt the same way.

Once you frame the issue as “trust”, you can see the effects all over a prosperous economy. People are willing to build houses and factories on their land, because they trust it will not be confiscated by government or revolution. Companies are able to grow quickly, because they can get huge amounts of funding from investors who trust that their ownership rights will be preserved. The entire concept of money exists only because of a massive network of trust that exists in modern rich society – a shared reassurance that the money will continue to be worth something tomorrow (despite the perpetual insistence of gold bugs worldwide). Without all of this trust, we would spend much more of our time worrying and devising safety systems and much less time actually getting things done.

The effect of trust is amazing when you think about its effect on your daily life.

A few weeks ago, I decided to finally re-paint the peeling exterior of my house. It’s a big place that would have cost at least $3000 to paint if I hired a contractor. Instead, I told a friend who runs a small painting company of my plans. He mentioned that he gets a 15% pro discount at the paint department of Home Depot, plus he had a one-time 20% off coupon valid on a specific day.

We went to the store together and bought my paint along with some supplies each of us needed – on his credit card. The store was running a 12 months-no-interest promotion, which further sweetened the 35%-off deal we were getting. My portion came to just under $400. We agreed that I would pay him back before the 12 month period was up.  Then we walked out of the store with an enormously valuable haul of products, bought only on a signature, to be paid back with no interest charges almost a year in the future.

Then we further complicated the picture with additional trust. He lent me his thousand-dollar paint spraying machine, a selection of huge ladders, other painting equipment, and spent a full day helping me get started. No payment was made – I just repaid the favor by helping him an equal amount on his own projects. I also ended up paying back the full cost of the paint through further barter arrangements.

In the end, I completed the $3000 paint job at an out-of-pocket cost of $0, with only the “cost” of spending a few spring days getting some exercise in my own back yard. Climbing up, climbing down, moving ladders, spraying, rolling, cleaning, and learning. All made possible by great amounts of trust!

So how does all of this apply to building a Money Mustache? I personally use the knowledge to shoot down the phrase “You can never be too careful.” Because I feel that yes, you sure as hell CAN be too careful. Just as with the recent article on Risk and Safety, there is always a cost to every bit of caution you apply. Mistrust adds extra cost to every transaction in your life, whereas trust makes those transactions glide nicely. And transactions, whether they are dinner dates, bike rides, work contracts or friendships, are of course the source of much of life’s wealth.

Make a point of surprising your own friends, children, and employees by giving them more autonomy and responsibility than you would normally do. Watch them flourish and grow and make your life richer. Give out your house keys to close friends or lend them your car if they need it.

You can stop safely short of being a gullible fool, of course. You won’t be responding to spam emails or signing up for multilevel marketing schemes or timeshare properties. The beauty of practicing trust is that you also develop the skill of knowing when to dish it out.  But if you’re not already one of these wealthy trusting people, you should be pushing your boundaries at least a bit.

Occasionally, you will probably get burned, just as I did with The Big Mistake. But that’s no reason to stop trusting! Mistakes are just high-end lessons, and they should only serve you to refine your Get Rich Through Trust machine.

I’ve made much more through trust than I could ever possibly lose through past or future mistakes. When you comb your own personal history for evidence on the power of trust, and combine it with the scientific evidence that it works at every scale from small to large, you’ll find that it’s the only rational choice.