Weekend Edition: The Life You Can Save 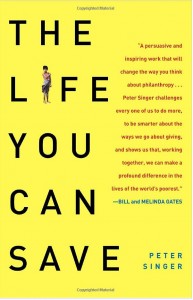 As a Mustachian, you are bound to get richer over time, even as your cravings for expensive manufactured stuff gradually fade away. If you haven’t seen this happening yet, don’t worry – it is inevitable, and you’ll love it. But eventually, the end result is likely to be a surplus of savings, a certain amount of unnecessary income, and the continued desire to put it to work.

The thing is, “putting it to work”, just like “rich”, means different things to different people. So at the recommendation of some MMM readers, I just read an interesting book called “The Life you Can Save“.  Written by Peter Singer, an Australian-born philosopher and professor at Princeton University, this book has been creating a pretty big stir in the few years since its release.

I read it in search of perspective on how to give to charitable causes in an efficient way. As a newcomer to any serious form of giving, I figured it would be good to learn from people who have done it for all of their lives. But I got a bit more than I bargained for. Singer not only explains in detail what type of charitable giving allows your dollars to go furthest, but he lays out a powerful logical argument for why it is worthwhile doing in the first place.

To explain the basic premise of the book, let’s have an imaginary version of Peter Singer participate in an interview with an imaginary past version of myself (we’ll call him Mr. Non-Charitable Money Mustache), to see how he answers my questions.

NCMM: “I like the idea of helping people, but I’m kinda busy leading my own life. Why should I care about helping those I don’t know?”

Peter Singer: “Put it this way: if you were out on a hike, and you saw a small child falling into a pond, starting to drown.. would you wade in and save the child?”

NCMM: Yes again.. but that’s a real kid there that I can see. Of course I’d save her. But charitable work often involves people you’ll never meet. Maybe even in other countries.

Singer: Imagine you’re on a lifeboat, and the titanic has just sunk. People are swimming all around you. You can save five lives. There’s one person floating off in one direction, and there are five people stuck under an overturned lifeboat in the other direction, so you can’t see them. But you know they are alive and can be saved. Given only one choice, which direction would you row?

NCMM: OK, you got me there. But wait a minute. Does saving lives really help the world, given that we are way overpopulated already? Won’t a person “saved” now just die of starvation next year, or decrease the wellbeing of all the remaining living people so there is no net gain?

Singer: Actually, the effect is the opposite. Saving lives (decreasing childhood mortality) has a very powerful effect in reducing the birth rate in developing countries. Mothers become less afraid of losing children, so they have fewer of them. Also, as the education and productivity of societies rises, the birth rate drops. This has been scientifically documented and the effect is enormous – so powerful that most rich countries actually have shrinking populations based on birth rate alone –  immigration is the only thing that provides net growth.

NCMM: All right. But wouldn’t my contributions just be a drop in the bucket, in a hopeless sea of needy people?

Singer: No, but you’ve hit on a classic problem with human behavior: diffusion of responsibility. If a single person sees an injustice being committed, like a thief or a child drowning, he is very likely to step in and help. However, if a crowd witnesses the event, the help becomes much less likely, even though there are more people available to help. And if there is a real cost to helping out, the problem becomes more extreme: people don’t want to contribute their fair share, if they see the rest of the crowd not doing the same.

NCMM: Let’s assume I can get past all the barriers and I decide to get into charitable giving. Where will it go furthest? Would it be donating to help low-income families in my own community? Or for those who are part of a church, donating to their church? It seems that overall in the US, many people are involved in these things.

Singer: Unfortunately, while the US population is slightly more generous than the average rich country when measured in absolute donations, it is one of the least generous when measured in helping those who need it most – the people of the poorest countries. When you donate locally, you are still doing some good, no doubt about it. But when you help someone in, say, a really poor village in Rwanda, you are saving people from decades of debilitating diseases – things like missing limbs or a lifetime without being able to breathe properly. The needs are just staggeringly higher, and the cost of solving them is much lower. If you have a strong stomach, look up “fistula” and see what millions of women are living with for lack of a 20 minute surgery. I’ve estimated that an entire human life is saved for each $200 donated to the right organizations. And in fact, if the wealthiest one percent of the world were willing to give just 5 percent of their wealth to the cause of eliminating extreme poverty, it would be sufficient to pretty much wipe it out within one generation.

Singer: Yes, it can definitely be ineffective. When we ship our surplus crops to poor countries, we allow temporary eating, but destroy the country’s local farming industry in the process. If we provide money to prop up lazy governments, a country may never develop the ability to produce for their own needs. So, effective aid is usually targeted in the “teaching how to fish” category. Vaccination against disease allows people to be more productive through their lifetimes. Drilling a central water pump for a village will save labor previously wasted on hauling unsafe water from miles-away rivers. Providing solar power systems can allow villages to benefit from electricity without waiting decades for a national power grid to be made. And microlending organizations allow people to start businesses without resorting to dangerous loansharks which are currently the only source of investment capital for some.

MMM: All right, this has been pretty convincing, and I definitely feel better about having most of my own charitable contributions go towards world poverty. I may still do some “luxury giving”, like helping out my own elementary schools, but that is sort of the icing on the cake that provides motivation for the real work. What organizations do you recommend as most effective for people who share this goal?

Singer: This scene has brightened in recent years, and you can now go to GiveWell.org and pick efficient charities from their list. They in turn evaluate and recommend groups like the Against Malaria Foundation, Schistosomiasis Control Initiative, Small Enterprise Foundation, and many others you can browse through. On top of this, Oxfam, Unicef, and The Hunger Project are effective organizations.

So where does this leave the typical person saving for early retirement?

The point of this article is definitely not to throw a monkey wrench into your plans for financial independence, or to create any sort of guilty feelings. Singer himself suggests that it’s a good thing that Warren Buffett did not choose to give away his first million dollars to charity, because it was the seed from which he has built over $50 billion dollars which will eventually go to eliminating poverty (via the Gates foundation). On top of that, there is a logical case for not giving too much of a rich country’s GDP away at once, because some of our luxuries (nutritious food, fast transportation, and fancy computers) are precisely which let us become so productive that we can generate sufficient wealth to help the rest of the world.

Taken to extremes, the Peter Singer ethical argument can lead to bizarre outcomes. For example, he suggests that people should not value the comfort of their own children more than the lives of the children of other people, which could lead to some very barebones parenting if taken literally. Luckily he reconciles the viewpoint at the end of the book by suggesting a simple scale: allocate only 1% of your first $105,000 of income to charity, 10% of your next 100,000, and so on.

If I were to add my own twist try to make sense to all of this, I would throw in some Richard Dawkins: we’re all really just collections of selfish genes, and it is in our nature to care more about people in our family than people outside of it, and people in our community more than people outside of it. The reason is that our genes are more likely represented in our family, and our chance of successful reproduction improves as we have a well-knit community. So don’t be ashamed of your human nature, or your natural desire to help yourself first.

BUT.. as people studying happiness in some depth, we have an advantage in that we have a greater understanding of what “helping ourselves” really means. For example, I have found that regardless of how selfish I choose to be in living my own life, my material desires simply don’t extend beyond about $2000 per month. That is why it was an easy decision to commit to donate a potentially unlimited amount of future income to charity in the future (with the very small $10k amount already allocated). It’s because I can do it without having to sacrifice anything at all! (And of course because giving is very rewarding for its own sake).

If we could get more of the world’s rich people to grow similarly bored with spending so much on themselves and their immediate families, the effects on society would be astounding.

So there’s the message I took from this very influential book. Whether you relate more closely to Peter Singer or Mr. Money Mustache, the message is the same: if you really evaluate the marginal benefit of spending money on yourself once your needs are met, and you learn about the other options for putting your money to use, you may be in for some beautiful results.

elsewhere on the web:
Peter Singer has been everywhere and talked to everyone about this. Even Stephen Colbert: http://www.colbertnation.com/the-colbert-report-videos/221466/march-12-2009/peter-singer

Previous Post: Lighting Up the Bikes for the Darker Half of the Year Next Post: Quitting a Cash Cow Job