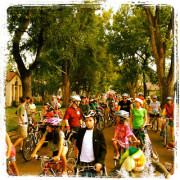 This is just a note to the local Mustachians around Longmont – the rest of the world can safely ignore this call to action.

Have you heard about the Bike Nights we’ve been having around here these days? They have been reaching record proportions, with the inaugural one of the 2013 season last week reaching about 213 bicyclists.

So here’s what happens. We all gather in the parking lot on the South end of Roosevelt Park. It’s a whole mixed mob, with people on regular bikes, outlandish cruiser bikes, that one guy with the 6-foot-tall homemade Double Bike, a whole flock of little kids rocking their own bikes, and our leader Ryan, riding a custom cruiser which is pulling a homemade Rocket Ship Trailer in which he he has installed a car stereo amp, speakers, subwoofer, and LED rope lighting to provide a soundtrack to the craziness. 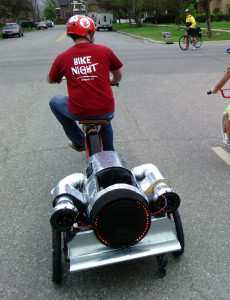 The whole group winds its way slowly through the big leafy streets of old-town Longmont and the surrounding bike paths with special uniformed people who block off roads for us so we can roll through the whole place Barack Obama style.

It’s a festive event. There’s generally a pre-party where people drink beer, sub-groups that peel off into pubs as needed, people with 6-pack-holders built into their handlebars, and of course, a post party for those who make it through the whole ride. The kids run around and play late-night hide and seek and everyone pretends it’s not the middle of the work week. I couldn’t think of a better way to spend a Wednesday night.

I’ll be there as usual, (as will Mrs. and Little MM) so if you want to join the Mustachian contingent, just show up with your bike and we’ll have a good time. I’ll be on a blue “Pacific” cruiser bike with a mustache sticker on the handlebars. Here’s where we’ll be meeting – right at the letter B on the map below, or see this google maps link.

It starts at 6:30PM. Send a comment or a Tweet to me if you’re planning to come (we can even meet in the park a bit in advance if you like), and I hope to see you there!* 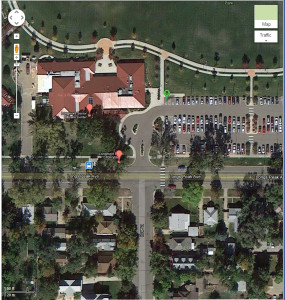 *And if you can’t make it this week, there’s always next Wednesday. I’ll mention future ones on the twitter feed rather than the main blog.

Previous Post: Do We Need to Fire the Entire Financial Advice Industry? Next Post: Which Part of the Money Wave do you Surf?