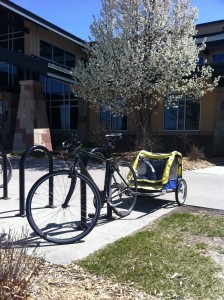 Hey there.. welcome to the first edition of the new “Get Rich With…” series. In these articles, we’ll analyze a bunch of ideas, both new and old, to see what kind of impact they can have on your life. (Hint: the impact will probably be a huge positive one, since these are all of my favorite moneymaking ideas). And this edition is about the good ol’ fashioned Bicycle.

The bike will probably turn out to be the best thing ever invented for humankind. It is taking us a while to realize this, but I think more people are coming around with each generation. You see, bikes were invented before they were truly needed, when the world was sparsely populated. When cars came along, they seemed like an improvement on bikes, bringing us great speed without any effort at all! Unfortunately, as a side effect they destroyed the whole fuckin’ world.. and made most of us dangerously obese too. With a new understanding of these side effects, the bike seems like an increasingly appealing alternative.

The fundamental reason for the Bike’s status as the Greatest Invention of All Time is its unique combination of simplicity, efficiency, and incredibly good health benefits. Interestingly enough, those are the opposite of a car’s attributes. The Bike is simple with just a few moving parts, simple enough for most people to maintain entirely on their own without paying a mechanic.

It is efficient in many ways: bikes weigh only 20-30 pounds but they can carry ten times their weight in rider and cargo. They convert a slow human with a walking speed of 3.5MPH into one of the fastest creatures on land, with an easy cruise of 15MPH and a top speed of over 40MPH on level ground and 50+ downhill for athletic people. And the side effects are incredible.. vigorous biking can consume 1000 calories per hour, meaning you can burn off an entire pound of fat in one big 3 hour ride. This kind of exertion pretty much fixes up all the rest of your body for free too, clearing your arteries, polishing your kidneys and teeth, and giving you clean stylish hair and a better sense of humour, all after the first ride.

But another side effect is that bikes are good for your wealth. Let’s start with the bare minimum: any mileage you put on your bike instead of your car saves you about 50 cents per mile in gas, depreciation, and wear and maintenance. From this savings alone, doing a couple of bike errands per day (4 miles) in place of car errands will add up to $10,752 over ten years.

But the benefits are greater than that, of course. Once you get into bicycling, it may grow on you. You may be able to go without a car, or you might find, like me, that having an expensive car is no longer useful as a status symbol to you. This would allow you to keep a less expensive car (saving another $30,000+ over ten years). You might find that biking around becomes a source of leisure as well as transportation. This would displace other more expensive leisure activities. Driving to the stadium to watch a monster truck rally with the family ($100) could be replaced by biking along the creek path and wading around in the waterfalls ($0). Replacing even $10 per week of paid leisure with free biking would net you another $7680.

Then there are incalculable things like health and productivity. But we are bold enough to calculate them here. By riding to work instead of driving, you are boosting your mood and your mental focus. This allows you to work smarter and longer. It also makes you better looking. These factors will allow you to earn at least an average of 5% more than your unfit counterparts would after various raises and job switches kick in. For a worker at the $50,000 annual level, this is a $2500/year boost ($37,500 after ten years). Then there is the reduction of doctor visits and prescription drugs which will benefit you when you are older. This is a large future sum, but let’s set estimate the net present value to be about $500/year ($7500 over ten). And we haven’t even gotten into the effect of greater health on your overall enjoyment of life.

I’ve been a bike evangelist since childhood, but only recently did I discover the way to make your bike even MORE POWERFUL – with a BIKE TRAILER! In 2007 when my son was old enough to start riding around with me, I bought a trailer like this one* from the online bike store called Nashbar. This revolutionized my biking life, because suddenly my wife and I could get the little lad to most of the close parts of town with no car! When you leave the kid behind, these trailers can also carry a massive $150 load of groceries, or even a bunch of stuff from Home Depot like a few cans of paint and some light fixtures. I’ve put over 1000 miles on this trailer since I bought it, meaning it has saved over $500 in car costs alone.

The final issue to address is the “But I can’t ride a bike in my city/climate/physical condition/age” excuse that 99% of people over 12 in this country seem to cough up.
The answer is, in 99% of these cases: WRONG! Amsterdam is chilly and rainy, and this is how the bike scene looks there. In Hamilton, Canada, I rode year-round to get to McMaster University, through a dense downtown area in snow up to a foot deep. It was awesome. In Asia, the streets are packed with 90-year-old-ladies zooming along on cruisers with panniers full of chickens and such. If you are too heavy to look good on a bike right now, start biking and you soon will not be. JUST GET THE BIKE and you will see.

So, if you grow a big Money Mustache today and go out and get yourself a good city commuting bike – try one of these – then here’s what you will have in ten years:

That’s in only TEN YEARS!! A pretty good return on the investment in that $299 commuter bike from Nashbar, eh??