A Millionaire is Made Ten Bucks at a Time 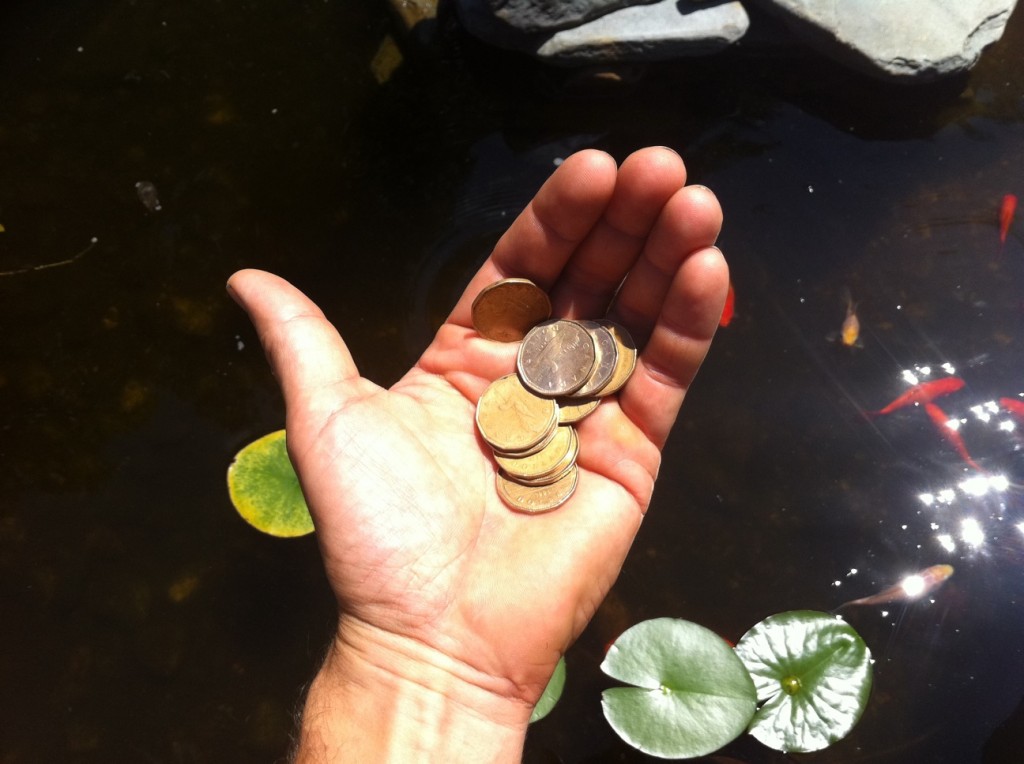 I was at a party recently and a lifelong friend walked up to start a conversation.  Although we had never talked about money before, it turned out he had secretly been reading this blog, and now he had a few questions for me.

“I understand now that even a family can retire on well under a million dollars*, but that is still a lot of money. Yet your blog talks mostly about small things like saving $70 a month on electricity or gasoline or coffee.

Aren’t these two different universes of savings that don’t even relate?”

My friend had a good question, of course. It is this perception of “small” versus “large” amounts of money that is the downfall of most of us.

It drives many to fantasize about lottery winnings, since that’s the only way to become a millionaire if your job title doesn’t include CEO, NFL or Notorious B.I.G., right?

And meanwhile, we buy $9.75 bottles of Kirin at the sushi restaurant and $12.00 movie tickets to see the newest Pixar movie with the kids in the movie theatre and pour $70.00 of gasoline into the family SUV so we can burn it up every couple of weeks running around town for relatively short trips. And we don’t become millionaires very quickly at all.

The solution to this is a change of mindset: It’s time to start getting excited about ten bucks again.

When I was eleven years old, I had to cut my parents’ enormous and hilly half acre lawn by pushing a fume-spewing 21-inch Lawn Boy for two hours. For this afternoon of sweaty torture, I would earn five bucks.

Then I would excitedly wait a week so the grass would grow and I could repeat this process to earn another five bucks. At this point, I would have ten bucks.

Sure, that was a long time ago. But even today, ten dollars will still buy about 9 pounds of delicious, kickass, nutritious, muscle-fueling rolled oats – still a solid staple food for many healthy millionaires, despite the fact that we can easily afford. Or two gallons of organic milk. Or enough gasoline to drive over 200 miles in a good car. WEEKS worth of regular driving if you don’t have a ridiculous commute. Or enough natural gas to provide hot water for showers and dishwashing for a family for several weeks.

Ten Bucks is a lot of money. So you need to respect it.

Ten dollar bills are not just food stamps or amusement park coupons that you fork over by the dozen to get restaurant meals, smokes, strippers, drinks, tourist attraction admission, and assorted domestic services. Each Ten is a critical brick in the Early Retirement castle you are building.

So how can we get from ten dollar bills to six-figure sums required for early retirement? Think of it this way:

If you could somehow $796 per week, and each week invest it to get a rather typical 7% compounded investment return after inflation, after just ten years, you’ll have about $600,000 sitting in your account. And to be more accurate, this money won’t be just sitting around – it will be 600,000 little employees working for you tirelessly in the background, producing thousands of dollars per month of passive income.

As you can see in the footnote section below, that is more than enough to start a nice Early Retirement, especially if your house is paid off. Maybe more than twice as much as you need, but since we do conservative calculations here at MMM, let’s roll with that number.

Suppose you’ve got two income earners working together. Now each one has to save only $398 a week.

There are 112 waking hours in each week. So to go from “broke” to “rich enough to retire early” in just ten years, each person has to make 40 successful ten dollar decisions each week.

Some of these decisions can be made automatically – like owning a less expensive car and driving it less ($100 per week per person), using less electricity and other utilities ($25), eating most office meals without going out to lunch ($50), not having cable TV and in general spending less time in retail establishments ($25). Now the remaining number is only $200 a week.

Those, combined with the automatic savings above, are the ten-dollar decisions that make the difference between the typical broke and indebted person, and the Mustachian Early Retiree.

Now, before the whiners start chiming in and saying it is no fun to spend zero money, you must realize that there is plenty of wiggle room for luxuries in my numbers.

Each person is saving $400 per week or about $20k per year on top of their house payments. Yet many of us have a take-home pay of over $30,000 per year. Sometimes way over that amount.

There is plenty of money to go around in this situation, and I’m even giving you a single family home to live in and a relatively quick 10-year sprint to retirement! If you have any issues with my numbers, make your own adjustments and the results will still be amazing.

But even with all this room for indulgence, it is important to keep your priorities in order, otherwise you are combining Luxury with Fantasy.

For example, it is absolutely ridiculous to buy even your first bottle of wine or restaurant meal if you do not yet have a good bicycle and a bike trailer.  It is insane to buy a luxury car if your house isn’t even paid off yet.  If you still have student loans, get them paid off BEFORE you splurge on that iPhone or overseas vacation.

You can still have these frivolous and fancypants things, some of which I admit to owning myself. But you need to have a rational definition of  “Can I afford it?”

Part of the Ten Dollar Philosophy is that you must pay for the current luxuries in your life before you start adding additional luxuries.  (Can you tell I love that word)?

I’d also suggest that since luxury spending is primarily for pleasure, you could try doing much of your purchasing for other people. Perhaps counterintuitively, it is proven that most of us get more pleasure buying a necessity that really helps someone else – for example, a bike for a family member who can’t afford one – compared to yet another luxury for ourselves – a $100 hairstyle or an upgraded china set for our yacht’s main dining room.

So there you have it – the way to become a Retired Millionaire using just those useless paper scraps in your wallet – by changing the way you think about them.

* A family of four in the US can live comfortably on about 24k per year plus having a paid-off house. With an nice conservative 4% annual withdrawal/return rate on your investments, you need $600k invested to generate this cashflow, inflation-adjusted, forever, plus your $200k house. $800k total. Or, if you want to get off your butt and work very occasionally to earn $12k per year, you can slice the $600k number down to $300k! Or you can save the $600k AND work, and keep saving more and more over the years – ending up a multimillionaire all while doing very little paid work.

** Holy shit, that’s quite a neat little verse I came up with there! Believe it or not, it happened completely by accident.

Previous Post: Hypermiling: Expert driving to save 25% on gas. Next Post: Mrs. Money Mustache Receives Many Gifts for Her Birthday