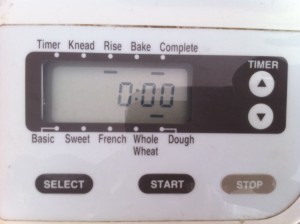 Some consumer products become the butt of many jokes, because they are often bought in a fit of good intentions, but then discarded almost immediately. Treadmills and exercise bikes are in this category, as are juice extractors and bread machines.

So you can understand the hesitation I felt three years ago, when the temptation to own a bread machine of my own started growing within me.

The justification in my mind was that we were eating a lot of bread at the time, and hey, who doesn’t like fresh bread?

So I let the idea sit and rise for a while, and meanwhile the Mrs. and I went over to dinner at the home of some friends one night. These friends are a sophisticated and frugal couple from Holland who had just moved to the US.

They served us an exotic spicy vegetarian meal that was insanely delicious, with a slice of steaming seed-encrusted fresh-baked bread on the side.  “Damn!”, my wife and I said, “We need to start eating more like you two!”. The table immediately broke into two discussions – the ladies debated the merits of various vegetarian recipes, and the men went to the garage to learn about this whole bread machine deal.

What I learned is that a bread machine is not necessarily a failed consumer product to be scoffed at. In the right hands, it is an instrument of Supreme Frugal Gourmetitude. “You just throw in some flour and a few other things”, explained my European friend, “and you have a great loaf of bread in just a few hours. Since you eat the bread each day, you are forced to make more several times per week. There is no chance of not using the machine regularly, so I do not understand why these machines are often abandoned in the United States.”

I love how Dutch people explain things, by the way. It is as if in their country, logic and reason are actually practiced by a majority of the population. (?!). When you add the cool accent, you have a very persuasive group of people.

With this new endorsement from a logical person, I had a peek on Craigslist. Sure enough, there were dozens of almost-new bread machines out there. I was able to find one right in my own town, at a price of $10 (the original value of this particular machine was around $100).

Three years into ownership, I must say that this machine is still a huge hit. First of all, the cost savings are significant: to buy a good-quality loaf of whole wheat bread in the grocery store costs about $2.50. To put in flour, yeast, olive oil, water, salt and sugar costs me about 50 cents to get an equivalent sized loaf of bread, with flour purchased in 50-pound bags from Costco. The time investment is also miniscule – without any special preparation, I timed myself in measuring the ingredients into the machine and pressing ‘START’ last time I made bread: 90 seconds. If you factor in the time needed to walk to the bread section of your store and pick out loaves during regular grocery shopping, the net time cost might even be zero. Plus I prevent a plastic bag from being manufactured as well.

So I’ve been saving two bucks per loaf, two loaves per week, for about 3 years. That’s $600 in bread money that is now part of the ‘Stash. Plus the bread is much more delicious, and you can even get crazy and make fancy bread – at various times I have made more decadent types such as my “Beer, Cheese, Bacon and Olive” bread. That stuff is baad~asss. You can throw in flax seeds, sesame seeds, even random crickets and ants from your back yard if you want to get really International/African with your recipes. Olive Ant Bread. Could be quite interesting.

BUT WAIT!! There is an even more exciting contribution this $10 machine has made to my life. It has completely eliminated the temptation to order pizza. Nowadays, I make the pizza dough in the machine, and roll it out into enormous thin-crust sheets which I bury in gourmet ingredients. It is just ridiculously delicious. I also make little personal 8″ pizza crusts by the dozen and freeze them. These are whipped out every afternoon and made into near-instant pizzas as lunch or after-school snacks for my little son. If you have a party at your house where pizza is in demand, you roll out some big fancy crusts and let the guests create their own edible works of art. It is a highly sociable alternative to ordering pizza that improves upon the experience in every way.

It’s hard to estimate how much cash this machine has saved me. At a minimum, it would be $600 in bread plus a a random allocation of $150 for pizza savings: $750. More realistically, we used to order pizza at least once a month at about $20 including tax, tip, and delivery. Nowadays, the raw ingredients cost $6 for a giant pizza. 3 years x 12 pizzas x $14 in savings per pizza is actually $504 worth of pizza, making this machine worth a total of over a grand so far. Regardless of the actual numbers, I am a happy Mustachian.

When it boils down to it, a bread maker is just another motorized consumer product that a true minimalist would scoff at. But in my own odd life which combines both frugality and decadence, I have found this device to be quite a worthy contributor to the family. If you eat bread and/or pizza regularly, I can safely recommend having a peek at your local Craig’s if you want to dip a toe into the breadmaking world as well.

*** Bonus Epilogue Section! ***
This article ended up gathering an unexpected number of views and comments. I figured I should update it with the following useful tips to make it more useful:

Once you get your machine, you will be excited to try it out right away, as I was. I walked into my standard grocery store (Safeway or Kroger) and picked up some whole wheat flour and breadmaking yeast. But when I did the math on the per-loaf cost, I was spending almost as much as the commercial bread! Why was this?

It’s because these ingredients vary widely in price. In the grocery store, they try to sell tiny 4 ounce jars of bread making yeast for $5.29 or so. In Costco/Sam’s club, you can get a 32-ounce double bag for a this price – maybe even less! Similarly, my local Safeway grocery store likes to display boutiquey-looking 3-5lb whole wheat flour in small bags for $5 bucks.. while Sam’s club was selling 50-pound bags of whole wheat for $15 or so when I last visited. Even Kroger (known in Colorado as “King Sooper’s”), sometimes has their store brand whole wheat flour for $1.79 per 5-lb bag. Since this ingredient can be stored forever, just stock up to infinity when you see it at this price.

The other ingredients (sugar, salt, oil, assorted seeds and grains) are fairly low cost at any store, but Costco still rules.

Update – almost two years later: Although Mrs. MM and I no longer eat wheat these days (she became gluten intolerant and we both moved to more of a Mark’s Daily Apple style of low-carb eating), this bread machine still gets used regularly. My son still requires fresh-made Dad’s pizza, and we make the odd loaf of gluten-free bread whenever we need the magical weight-gaining properties that bread seems to provide for us.

Previous Post: How much is that bitch costin’ ya? Next Post: Mrs. Money Mustache: What do newborn babies really need?