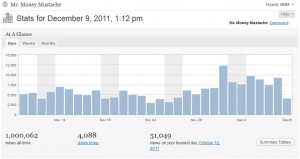 Today was a slightly exciting milestone in the life of this blog, in that it reached the one MILLION page views mark, measured since the day it was born on April 6th, 2011.

Some additional interesting figures: It has been around for nine months (although it feels like many years), and the Google Analytics stats page says there are might be about 25,000 regular readers and 5,000 RSS subscribers. Altogether, about 205,000 unique people have visited the site at one time or another. They made 424,000 visits at an average of 4 minutes each, meaning that on average, 104 hours of reading have been done each day. We’ve written up over 4,300 comments together.  Any way you slice it, there are at least a small city worth of Mustachians out there, which I find quite exciting!

Just today, for example, I learned that some guy started a blog called “Toward Mustachianism“, where he studies up on the concepts here, and applies them to his own high-income/high-spending (but dropping rapidly) lifestyle – and will surely see great results.

On a personal level, I have found this new role as Mr. Money Mustache to be quite a golden life booster. It is so much fun to get a chance to write down all these ideas and rants that have circulated in my head for years.. and have actual people read them and write back to share more. I feel the added challenge of thousands of imaginary eyes watching me when I feel tempted to make any sort of wussypants decision in my daily life. It has brought out many good laughs, and even brought me closer to some friends and family as well as finding some new friends out there around the world who I hope to meet in real life.

I mention all of this mushy stuff because I wanted to use this milestone as an excuse to say THANKS to my wife, Mrs. Money Mustache, for forcing me to start writing this blog. I was content to just occasionally write stuff down in an old Google document whenever it came to mind, with no interest or desire to ever publish it anywhere. But she set up this fancy blog system and reserved my previously-imaginary domain name, and then just left the whole thing sitting up there online, empty, taunting me, daring me to publish some shit. Since then, she has kept improving it and tweaking it, letting me know about mentions we received from other writers, and generally keeping things going.

That part is the key, because from what I’ve learned, it is unusual for a  blog to grow this quickly or even as large as it has. There are lots of technical hurdles involved and hidden side tasks, which I was not badass enough to spend the time to figure out on my own. Without her, I’m just a guy typing some shit into the computer, an activity which doesn’t just automatically create a fun community like this. It’s much like our family’s kickass roadtrip vacations, where she loves planning them out in meticulous detail, at which point I get to just hop into the driver’s seat of the fully-packed car, glance down at the already-programmed GPS, and say, “Ok, so where are we headed first!?”.

When it comes to poking around on the Internet and figuring out how to get things done, Mrs. Money Mustache is the bomb. That is one smart lady, and when she gets an idea in her head, she works non-stop and implements it and irons out all of the creases until it’s perfect. I respect that greatly, because it’s the formula for success in most forms of work.  It has also been great to have her as an occasional writer and commenter on the blog itself, and hopefully we’ll hear from her more often in the future.

Meanwhile, I’m not that great of a blogger, because ever since becoming a parent I tend to spend most of my time away from the computer. While I reassure myself that this is essential to be a REAL Mr. Money Mustache who has an actual life to write about, it does mean that I tend to let a lot of details slip in the blogging world. Story ideas get thought up but then forgotten, emails go unanswered, and more complicated articles requiring research sit around half-written. I apologize to the many dedicated people that write in every week with ideas and questions which do not get the timely attention they might get with a full-time blogger. It makes me feel a bit uneasy, because I don’t really like doing a half-assed job at anything. But oh well, at times like this we must take our motivation from the Honey Badger and just do it.

Over time, even small efforts like this can build on themselves and collect into a bigger success, and that’s my goal, the reason I will stick around and keep having fun here with you. Hearing every day from people who have sliced out their long car commute or made lifestyle changes that completely improved their lives is an incredibly good feeling. I can’t stop, as long as there is good stuff like that going on, and the scale of everybody making changes in their lives is much more than anything I could accomplish by myself. By one calculation, this blog has indirectly wiped out over 1000 person-years of average rich-country consumption already!

And there is SO much more to be said and learned! I noticed there are now 152 articles on this blog (equivalent to the length of a 600-page book!), but looking in my Drafts folder, I see there are MORE than that many unwritten ones waiting for further details or the right time to share them. More of them get added every day, as part of conversations at the kitchen table or out on the town with friends.

So for the foreseeable future, the Mustache must continue to grow. Thanks for making it happen!

(cover art and title is a takeoff of the 1988 album from oldschool rappers Dj Jazzy Jeff and the Fresh Prince).

Previous Post: Turning a Little Car Into a Big One Next Post: Watching your ‘Stash… with Mint