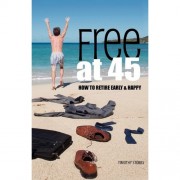 Imagine an alternate version of Mr. Money Mustache. What if I had suppressed some of my profanity, become just slightly less hardcore in my frugality techniques, and moved to Western Canada instead of the Western US? Who would I be?

You may already be aware of the real-world simulation that exists to model this situation, his name is Timothy Stobbs, and he is the author of the blog Canadian Dream: Free at 45, and the book Free at 45 : How to Retire Early and Happy.

I had the pleasure of reading this book during my recent vacation and was pleased to note how well it had been put together. Since it’s the Weekend Edition and I’m way behind on my book review program, I thought I’d share a quick review of the book with you right now.

About the Author: I came across Tim and the Canadian Dream blog shortly after MMM was born.  Maybe the connection was through Early Retirement Extreme, or maybe somewhere else. But it turns out that somehow, all of us small-time financial bloggers end up getting to know each other. Eventually we will all start holding regular meetings to play poker and smoke cigars in executive boardrooms while wearing 1920s hats, but we are not yet powerful enough for this.

From the wisdom of his blog and his book, and the concept of retiring at 45, I had assumed that Tim was older than me, like 43. But the book says he was born in 1978 – just a kid! This makes the mature perspective even more impressive. Watch this guy, he will surely become quite a sage with even more age.

So on to the book.

Free at 45 addresses early retirement from a different perspective than many of the most popular books. First of all, it does not set an age limit on the activity. It is a turnoff to me when books assume people will be done raising children and starting to experience physical decline when they retire. I like the idea of leaving the door open to any age of retirement, and this book does that.

Secondly, the book maintains a focus on understanding happiness rather than replacing most of your pre-retirement income. There are hints of the concepts of hedonic adaptation and stoicism in some of the happiness chapters, even without explicit reference to the terms. These things are the key to the whole deal: financial independence works much better with a free mind, rather than one that has chained itself to high consumption as a substitute for understanding actual human happiness. Chapter four, entitled “What we Need” is particularly nice in this area, describing the hierarchy of needs as described by Chilean economist Manfred Max-Neef:

Sustenance (food and water)
Protection (safety and shelter)
Affection (love and friendship)
Understanding (making sense of life)
Participation(being part of a social process)
Leisure (time to reflect on things, daydream, and relax)
Creation (making things)
Identity (knowing who you are)
Freedom (choosing for oneself)

When writing the book, Tim did something I have never thought of doing myself: He interviewed actual retirees. Then he gathered their perspectives and advice along with his own experiences when baking them into a book. That’s a good strategy, and it leads to a more flexible message than Mr. Money Mustache’s strategy of just telling you about his own early retirement experiences. I just may be cribbing from this idea myself in the articles to come.

Tim and I do have our strategic differences regarding how much frugality is ideal, which one could have already predicted by comparing our retirement ages.

In the book, there is a graph from a US study suggesting that the happiness vs. money curve peaks at an annual income (and spending) level of about $75,000. I’d suggest this is a bad spending number to shoot for because it represents the average result of a population of people with absolutely no Mustachian training. The amount of money required for peak happiness drops rapidly as your Badassity increases.

Another area of the book that made my Mustache bristle just slightly was the talk of “extreme” early retirement. To paraphrase “Some people choose to retire extremely early, which might require extremely low annual spending such as $24,000 per year. But you can kiss the typical North American lifestyle goodbye if you make this choice”.  If you review my lifestyle from the 2011 spending article, you can see that I have certainly not kissed very many material things goodbye – at least not when measured by factors like the quality and size of my house or the food, health, education, and travel that the MMM family enjoys. Similarly, the idea of retiring while you still have young kids was treated with a certain amount of fear – another taboo I have enjoyed breaking.

On the “Wholeheartedly Agree” side, I enjoyed the second half of the book’s simple presentation of the technical details. How to start by correctly assuming that your retirement spending should have nothing to do with your income level – earning more does not make you need more of anything to be happy. How to calculate investment returns and passive income requirements. How to account for special outlays like university assistance for children or extra travel. He even nicely described one of my own longstanding beliefs, that frugal people are partially immune to inflation because we watch the prices of things as the years pass, and are willing to adjust our lifestyle as needed to avoid getting suckered.  (Oil prices rise faster than food prices? Spend more time cooking and less time traveling! Opposite thing happens? Reverse the strategy!).

He also covers a bit about understanding risk so you don’t get suckered into spending unnecessarily out of fear. “Safety is an expensive illusion” is one sagely quotation in this area.  In many cases when you do the math, it works out much better to take a risk than to pay to protect yourself against the worst possible case of an unlikely event. (Life insurance for a two-earner family strikes me as one perfect example).

I also enjoyed the Canadian-ness of the book. It is refreshing to read a book where the author is not obsessed with health insurance. In Canada, you take care of your own health, and the society takes care of any medical bills. And it’s all done at about half the cost per capita of what we spend here in the US. It’s a wonderful thing and we should copy it to the best of our ability. It is also nice to hear about Canada-specific issues like the TFSA, RRSP, and of course litres, kilometres, and extremely cold winters.

This will surely boost the appeal for Canadian readers, since they are often stuck reading US-based publications (like MMM itself) and then mentally adapting the advice to their own country.

The book is casual and non-scientific, much like the writing you would find in a good blog. Some might even say the presentation is too casual and concise, but this is actually a positive factor in my opinion, because frugality and financial independence are more about attitude than science. In the modern world of publishing, we are all free to write and publish our own books, and the world is a richer place because of it.

So, thanks again Tim for sharing your book with me and with the world. If a Money Mustache Manual ever comes out someday, I’ll be sure to return the favour ;-)