Nicer Legs and Some New Carpentry Skills – for Only 15 Bucks

With the weekend almost upon us,  I imagine many triple M readers are looking for a productive and enjoyable activity that will fulfill all three tenets of the Holy Trinity of Mustachianism:

As luck would have it, I have a nice one for you today. After publishing the “getting started in carpentry” article, several people started throwing around ideas on the forum for useful do-it-yourself projects. One of the most useful ones that came to mind for me was the “Jumping Box”, an exercise accessory that I only recently learned about through Mrs M’s crossfit workouts. 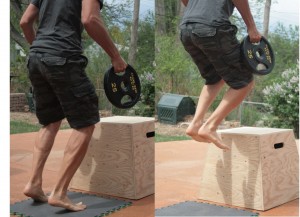 It’s a great first-time project to build, because it’s simple, cheap, and relatively forgiving of imperfect construction methods. Yet it also quite useful, because it can provide a lifetime of free exercise, plus it can serve as a spare chair or table, and it can even be used to generate income (more on that later).

After trying one of these things out in the Crossfit gym, I was instantly hooked. The basic idea of the box is this: It’s a 20″ high pyramid of sturdy plywood. You stand in front of it. You jump to the top of it and catch your balance. Then you jump down to the mat, bounce quickly back to the top, and regain balance.

The exercise provides a great combination of heart-pumping cardiovascular work, calf, quadricep, and hamstring muscle building, and balance and core strengthening as well. Plus it’s really fun, because hey, you’re Jumping! How often do you do that these days!? Jumping is for joy.

And it can be scaled to any degree. You can build a 12 incher or a 30 incher. I made a 20 for this article because it’s comfortable for most moderately fit people. If I want to make the exercise more strenuous, I just hold a pair of 25 pound barbell plates during the jump, as shown in the pictures (this also adds a bonus upper body component to the exercise as well).

One of the best parts of this project is that you make it from only about half of a single 4×8 sheet of plywood (I recommend 3/4″ thickness). Those sheets cost under $30 at a building supply store, so you’re really getting a great part of a home gym for about the price of a single drink on a cruise ship. So let’s get started and build this sucker.

The first step is to cut a long strip of wood that is 18.5 inches wide and the full 8 feet long. The hitch? You need to set your saw at a ten degree angle before making the two cuts to form the strip. Here’s what that looks like: 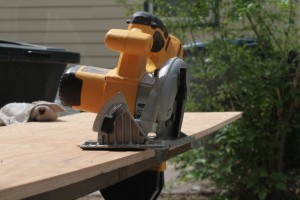 This is even easier with a table saw, but I’m showing it with a circular saw since more people have those. Even an 18V cordless saw as I’m using here has plenty of power to cut plywood.

You make two cuts, with the saw running the same direction, so you end up with a piece of wood that is a parallelogram when viewed from the end. 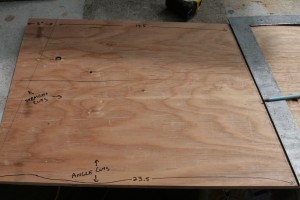 When you’re done sketching and ready to make the two cuts, remember to set your saw back to a zero-angle (square cut) and go for it. Then take your new trapezoid, spin it around to match the freshly cut angle on the remaining long board, line it up, and TRACE its right hand side, to give you your next cut line: 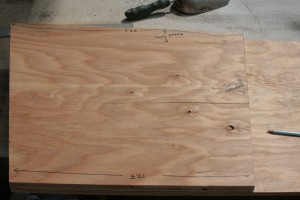 Here I rotated the first piece 180 degrees and traced it, to make a duplicate copy.

Cut that second line. Wow, you’ve already almost halfway done the cutting. But don’t go crazy and start tracing that piece again. You’ve just made the two LONG sides. Now you need to make the two SHORT sides, which allow for two plywood thicknesses, yielding a square box when you put it all together.

To accomplish this, measure across 22 inches at the bottom, and 16 inches at the top. Draw that single line, and cut out the piece. Then rotate it 180 degrees and trace it again, which will get you to this point: 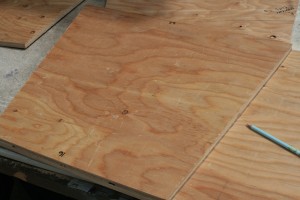 Now you’ve got all four sides. You can write “Long” and “Short” on them and line them up like this: 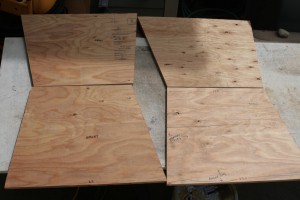 Now you take a Short piece, add some wood glue to its end, and butt it up against the flat side of a Long piece. Be careful of those 10 degree angles on the bottom and top: you want to orient them both so that the ends sit flat on your work table and provide a flat top when assembled into a pyramid shape:

Here are two steps pasted into one picture: glue the end of a short, then stick it to the long

So you take a Long, and attach a Short. Next, attach another Short, and you’ll have this: 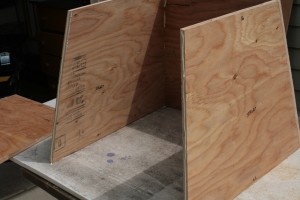 Then you put on the last Long, and flip the whole box over so you can trace the top and cut it out: 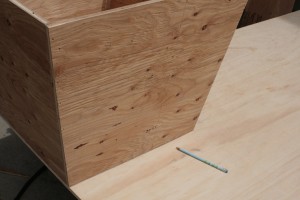 Attach the top, and you are pretty much ready to start Jumpin’! But you’ll probably want to consider these optional enhancements:

Interior reinforcement: For larger boxes, heavier people, or professional use (i.e. if you are building the box for a crossfit gym), cut out four 18″ sticks of 1.5″ by 1.5″ wood, and glue and screw them to the interior corners like this: 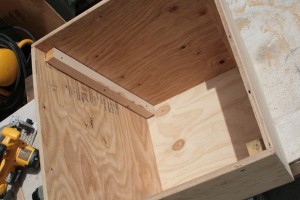 Nice Handles: Measure down 4″ from the top, in the center of the box. Then make dots 2″ to each side of that. Draw a 1.5″ circle, centered on each dot (perhaps by tracing a lid from your recycling bin). Or use a hole saw in a drill. Connect the two circles, and cut out with a jig saw. It sounds a little complicated, but really all you’re making is this: 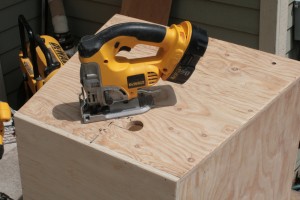 When you’re done with the handles, the last step is simply sanding and finishing the box. I leave mine unfinished, but I am fond of a nice sanding job with a belt sander. The finished product looks like this: 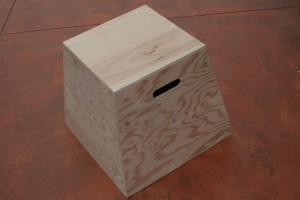 Isn’t that a beauty!? .. and these things are quick to make once you get the hang of it. The first one I ever made took less than an hour, and the second one was much faster than that.

A confluence of events has aligned to make it possible for an entrepreneurial Mustachian to make some great side income by making these boxes for other people: The “Crossfit” workout method has taken off and become a nationwide trend. Gyms are popping up in every city. Everybody, including all the crossfit gyms, wants these boxes. But most people do not have any carpentry skills, and the boxes are too big to make and ship cost-effectively from China – or indeed to ship at all.

So, depending on features and finish, these things can easily sell for between $50 and $100. But the raw materials are about $15 and less than an hour of work (probably as low as 15 minutes per box if you streamlined production and did them in bulk).

I made my first box of this type a few weeks ago and started using it regularly for workouts. But then it disappeared from my basement – Mrs. Money Mustache had SOLD it for fifty bucks to one of her crossfit amigos! So I made a second one for this article, but there are already requests to purchase it as well. I’m not going to start cranking these things out, because that would be too much like a real job. But that leaves the door open for anyone else who would benefit from a second job, to make a few boxes on weekends. If you were a high school kid, would you rather punch keys on the Target cash register for $8 per hour, or polish your woodworking chops in your parents’ garage for closer to $50? Yeah, I thought so.

See you in the air!

Previous Post: Unlocking your Home Equity for Profitable Investments Next Post: The Cost of Living is Too High These Days, Waaah, Waaah!