Electric Cars: Are they For Real?

The other day, the lady and I were biking through the parking lot of the fancy Natural Grocers food store, when I suddenly screeched to a halt, without even realizing why I had done it.

It turns out the reason was that one of these things had caught the corner of my eye: 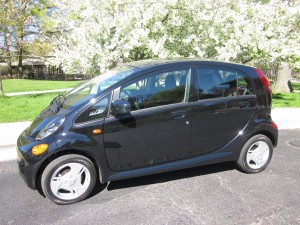 “What’s going on here?”, I thought. New cars don’t normally show up on the US market without me knowing about them first. Especially futuristic little space-bubble cars, which are my favorite variety.

Poking around the car in the parking lot, I could see that it had a roomy passenger cabin, gigantic glass area giving a panoramic view, and… no evidence of a gas-burning engine of any type. The hood was far too compact to house a conventional engine, and looking underneath I saw no exhaust system, none of the usual fiddly drivetrain bits, and instead just smooth underbody panels and a beefy electric motor.

What I had stumbled across is the Mitsubishi Miev (also known simply as the “i”), just the latest of several intriguing electric-only cars to hit this country’s market in the last few years.

For those not familiar with this new bit of technology, it is very real: electric cars are out there, and they kick some serious ass, offering comfort, performance, 100-300 miles of driving range depending on the car, and a silky-quiet driving experience with no road-level emissions. All these attributes are available not in the hazy future, but right now. Among the most prominent are these ones:

They are all expensive, but you can start by subtracting $7500 from the prices above due to a US federal tax credit on vehicles of this type.

That still leaves more dollars than the average Mustachian should be spending on transportation, but right about the same amount that most Americans spend on cars of similar quality in each of those performance ranges.

So what I had discovered in my local parking lot is the lowest-priced electric vehicle currently on the US mass market. It’s neat new technology and it sounds great, but it does lead a skeptical person to ask quite a few questions. Having done some work on electric cars myself, I can even try to answer them right here:

Does an Electric car really cost less to fuel for a given distance?

Yes. Way less. To understand the cost, let’s understand the baseline of fueling a gasoline car. If you have a reasonable car that gets 35MPG and you can get gas for $3.50 per gallon, your fuel cost is 10 cents per mile. If you’re a new reader and you still drive around in a truck, your fuel costs might be $0.20 or more.

Now check out this handy table I’ve made for you. You can see that the pure electric cars burn juice at only 2.4 to 3.3 cents per mile. From a cost perspective, it is like driving a car that gets between  116 and 145MPG, or like getting your gas for 89 cents a gallon. The exact cost depends on your local electricity price, but I used 10 cents/kWh, roughly the rate I pay for 100% wind-generated power where I live (coal power is only about 8 cents here, but it varies around the nation).

But what about the battery life?

That’s a good question. These cars use lithium batteries, and they are expensive today (about $400 per kilowatt-hour of capacity, meaning the MiEv has a $6400 battery on-board). General predictions seem to be a service life of 8 years or 100,000 miles for these batteries, which adds 6.4 cents per mile to the cost of travel, bringing us back up to 10 cents, just like a 35MPG car. And the bigger your battery pack (Tesla), the higher your cost per mile, as you are lugging around unused capacity which is fading away whether you use it or not. Uh-oh!

But wait: remember that an electric car does not need oil changes, transmission fluid, belts and hoses, fancy valve services or most of the other greasy stuff that comes with gasoline cars. In addition, big electric motors themselves have generally only one moving part, which in industrial uses of the past 100 years have shown that they are good for the equivalent of over 1 million miles with no service whatsoever. So you’ll get a lot of that 6.4 cents back in the form of avoiding expensive service visits.

On top of that, lithium cells have been developing in a Moore’s Law-like fashion, meaning technology and reliability has been increasing rapidly even as price drops. A friend of mine runs an online electric vehicle parts store, and I’ve been amazed at the almost monthly developments in the lithium ion battery market.

Imagine that you buy a high-end $1000 Core i7 ultrabook computer with a 256GB solid state drive today and use it for 8 years, until it dies. Then you want to replace it with another Core i7/256GB laptop in the future. When you go shopping, you find that even the slowest new computer is better than your high-end one was, and it costs $199. That’s Moore’s Law in action.

Many people say this, and the answer is that it depends. Even if you can only buy 100% coal-fired electricity in your area, there is a slight improvement in pollution by switching to an electric car. The difference comes due to the fact that power plants are about 40% efficient, while gas engines are less than 20% efficient (the rest goes out as heat). When you factor all the other stuff  like oil extraction and refining costs, electric transmission losses, etc., all you have to know is that the electric car does fine in this area.

The real benefit, however, comes in areas like mine where non-coal power is available. Here in Colorado, wind power is cheap and plentiful, and when you buy more of it, they just put up more towers in the otherwise-barren Eastern desert plains of the state. The impact on jobs is spectacular, as I keep seeing shiny new wind company headquarters popping up, and meeting highly-paid engineers and technicians who have come to the state to work in the growing industry. All caused by me just checking a box on my power bill that said “100% wind”.

We also have ideal conditions for solar generation, to the point that I can buy my own panels (even without subsidies) and build a system to charge an electric car off-the-grid, and the amortized cost of the electricity will be just as cheap as my grid power. (More details of solar harvesting are coming up in future MMM articles, as I continue to tinker with my own house with the goal of getting roughly energy independent over the next few years).

In California, solar power is extremely popular, and that state’s much higher electricity costs combined with federal and state incentives make it a no-brainer to convert a home rooftop to generate power and feed it into the grid.

So if you’re getting an electric car because you don’t like the idea of burning gas, you might as well go the whole route and use non-fossil-fuel electricity to charge it.

What about Driving Range? Will I run out of power in the middle of nowhere?

Oh, Waaah Waaah. Poor baby is accustomed to driving 300 miles on a tank of gas. And if his car ever stopped driving, he’d have to just sit in it and cry until he was rescued!

First of all, the range of these cars in the table above is estimated by the EPA, which assumes a lead foot and no driving skill at all. As a Mustachian, you drive your car efficiently, so you’ll see a 30% higher range (Japan’s more reasonable test cycle for these cars confirms that).

The GM (Chevrolet) Volt addresses this irrational fear by adding a gasoline engine and a fuel tank, which allows the car to drive in either electric or gas mode. It’s a beautiful car, but you pay for the convenience in the form of pulling two entire powerplants around, which leads to higher sticker price as well as weight (the Volt weighs as much as a small minivan), which leads to higher electricity consumption.

GM is in a tough place with the Volt, since they are trying to make a practical vehicle, but sell it to people who are still buying cars based on irrational emotions like “Is it fast? Will I look cool in this thing?”, and “What if I want to drive it to the Grand Canyon?”. Right now there’s a video on the site showing the unfortunate state of their marketing necessity: http://www.chevrolet.com/volt-electric-car.html

From a strictly financial perspective, I’d suggest getting a Mitsubishi Miev, and either renting, car-sharing, borrowing, or owning a fuel-efficient second car for your longer trips.

In fact, from a strictly financial perspective, an electric car is just like any other new car: it’s far from the most cost-effective way to get around. In a few years, depending on how the used prices shake out, they may or may not take on this status.

But for those of us who have far more money than we need anyway, and are interested in enjoying a high-tech luxury toy with minimal environmental guilt, this is an ideal candidate. I believe that paying the premium to be an early adopter, thereby advancing this industry so it can eventually displace the internal combustion engine, can actually be a fairly Mustachian choice to make.

Elsewhere on the web: Motor Trend reviews the Focus Electric vs. Nissan Leaf

Previous Post: To Reach the Top 5%, You Must Simply Kick the Ass of the Other 95% Next Post: Reader Case Study: The Long Road to Mustachianism