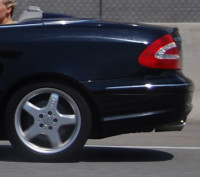 The recent 50 Jobs post has been a nice success so far: I was happy with my own start to the list, but as expected the readers (as well as my celebrity guest contributors) got back to me with even better ideas. We’ll have an easy time bumping it up above 50 when Part Two comes out in the near future. But I thought we should pause for a refresher lesson in effective living, because there have been so many illuminating events recently that it would be fun to put them together.

It’s almost a law of the Internet these days: if somebody comes up with an idea or does something, there will be an immediate nationwide chorus of whining and rattling keyboards as a large number of people hasten to complain and express outrage about what they’ve just read. A few examples.

Regarding the Jobs post, lots of people took the “Gaw! Those jobs are impossible to get!” tack.. I put a few quotes together from Twitter* for your enjoyment: 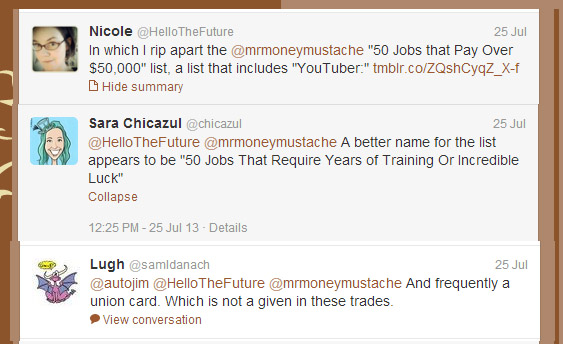 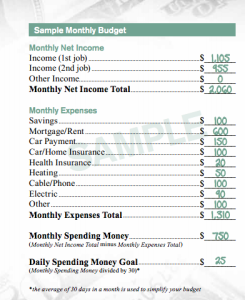 Gasp! Went the outrage on this one.. “They didn’t allow enough for health insurance, and they totally forgot GROCERIES!”

And finally, you’ll see outrage whenever a story hits the news, and happens to feature people like you and I who are earning good money (“BLAUUGH! FUCK THAT PERSON LIVING IN FAIRYLAND WITH THE HIGH INCOME! REGULAR FOLKS DON’T EARN THAT MUCH!”),

or not spending all their money (“YEAH! NICE LIFE! TRY THAT HERE IN EXPENSIVEVILLE WITH MY 80 MILE COMMUTE!!”),

or for the general case of a story about anything at all, (“AND OBAMA FEDERAL RESERVE TOILET PAPER FUCKIN’ LIBERAL BLABLABLA!!”)

The ladies who didn’t like my list of jobs were suggesting that it was poor advice, because their own experience (or speculation) suggested that it is extremely difficult to get jobs like that and earn over $50,000. Yet the only reason I put those occupations on the list is because I have repeatedly met people who do all of those things, and dabbled in at least half of them myself, and found that they do indeed generate income at a greater-than-$50,000-per-year rate.. including this blog. All of this is new to me as well – ten years ago I was still an engineer and I would have told you that the only way to make good money was to get a degree and then work in high-tech.

I’m not putting things on this top-50 list to build false hopes so I can sell you courses or e-books. I’m doing it because I’m genuinely excited about the stuff I have discovered and happy to share it with a group that may be more focused on traditional employment. From what I’ve learned, making money based on sharing content through the internet is not a lottery. It is something that can be methodically and successfully done – as long as you have the required underlying talent and do the right research and work. Just like being a plumber, electrician, or carpenter. Not every job is a good match for every person’s DNA – why express outrage over that revelation?

Next there’s that McDonalds budget. It was a funny attempt by some out-of-touch corporate types, sure. But when I read it, rather than feeling outrage at the lack of a line item for heat or groceries, I had the opposite reaction:

“Wow.. even with a financed car, $100/month for “cable/phone”, and four times my entire houshold’s electricity consumption, these people still have $750 in “monthly spending money” remaining. Not bad at all! I’m outraged** that anyone would think this budget is sparse!”

Sure, I briefly made a good salary in software in my 20s. And many people in the field earn much more: Bill Gates used to personally visit the campus of Canada’s Waterloo University each year and offer $100,000 starting salaries to the top 100 computer science and engineering students. And many of them would refuse the job offer in favor of even better opportunities. Many people of my age are now running companies or working in financial jobs where they earn millions, rather than hundreds of thousands per year.

And equally impressive, many others are living far more badass lives – being a ranger in Northern Alaska, touring internationally as a startup musician, growing most of a  family’s food on their own lots, while maintaining a full-time job on the side, volunteering and donating more than I do. Many people, most of the world in fact, lives on a tiny fraction of the supposedly frugal amount of money we burn up each year.

Should we be outraged at people who do something that we haven’t yet done ourselves? Or is it more productive to just say, “Hmm.. I hadn’t realized that was an option! I am glad to have it added to the broadening suite of fun things that I might choose to do in my life, now that I am getting the money part of things under control.”

In a sense, this shift in attitude really goes back to one of my favorite posts on this blog, the one called “The Practical Benefits of Outrageous Optimism“. In that one, I argue that the very act of believing in the viability of a bold plan, greatly affects the chances of you succeeding at it. Given that we know these things are possible, what benefit can be had by building a Whiny Wall between ourselves and the tasty rewards?

With this in mind, we will return to 50 Jobs -Part Two in our next post, where the potential jobs will be equally surprising, and yet not outrageous at all.