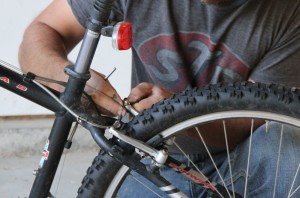 That recent article on the Low Information Diet (which I probably should have called the Low Irrelevant Information Diet) stirred up quite a debate. While some readers offered their double high-fives of agreement, others came out with pitchforks and torches, scolding both Mr. Money Mustache and any who dared to agree with him for “Celebrating Ignorance”.

I can blame some of the misunderstanding on my own lack of skill – I try to write these things to be as clear as possible, and the success is measured by the percentage of people who write angry responses based on missing a key concept. And sure, we could dismiss a few other people as hopeless complainers who will whine about anything – there’s no changing their minds without a good set of boxing gloves. But among the intelligent dissenters, the biggest part of the chasm of misunderstanding seems to be coming from a hole in their grasp of the ideas of the Circle of Concern, versus the Circle of Control.

These terms come from Stephen Covey’s ridiculously powerful classic called The Seven Habits of Highly Effective People. It’s a book so old, so wise, and so essential that you are probably living a pointless life if you have not yet internalized its concepts. I first read this thing about 20 years ago, and I’ve reviewed it about ten times since then*. The concepts are so religiously ingrained in my mind at this point, and have proven to be accurate through so many real-life tests, that I tend to go into a mouth-frothing rant if I see someone not following them. Whether it happens in my comments section or at the table in my back yard surrounded by beers and fellow liberal-minded hippie do-gooders earnestly repeating conspiracy theories, the offense is equally severe.

“What nonsense is this Infidel spouting before me? This foolish assertion directly violates the First of the Seven Habits!!“

So here it is in a nutshell: You will have a much better life, if you focus your mental and physical energy ONLY on the things you can personally influence. Everything else is a distraction that pulls you away from running your life properly. But quite counter-intuitively, this smaller focus does not shrink your influence and your ability to do good. It causes these things to increase. 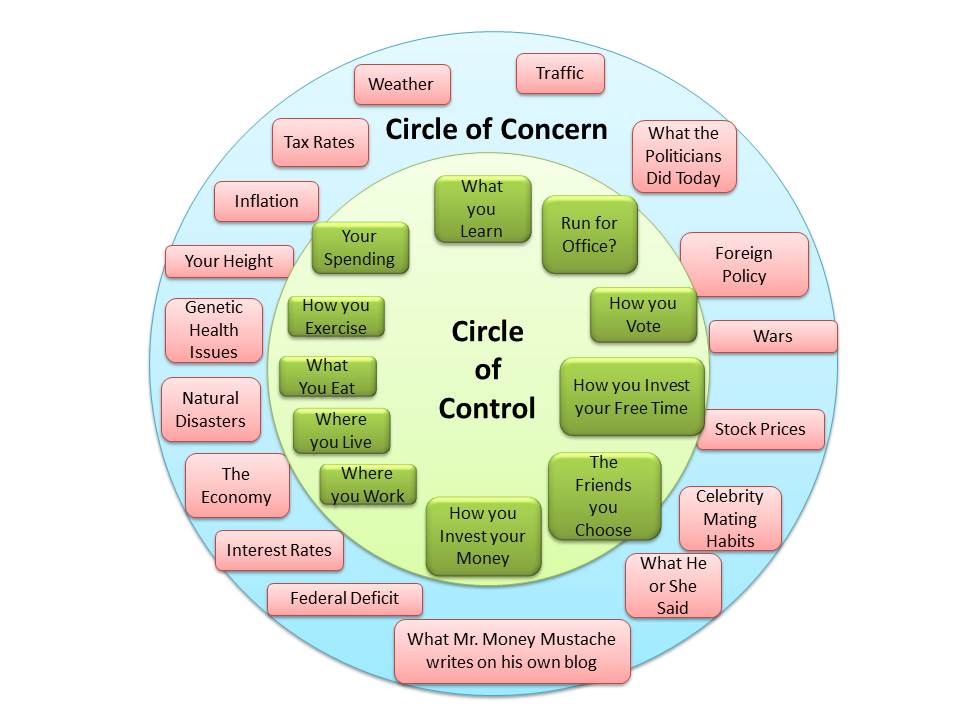 Although this is the default human condition, there is another way to live. It is to shrink your circle of concern (ignoring the daily news and concentrating on deeper sources of information), while using the newly liberated brainpower to work only on items within your circle of control. This is called taking a Proactive stance. 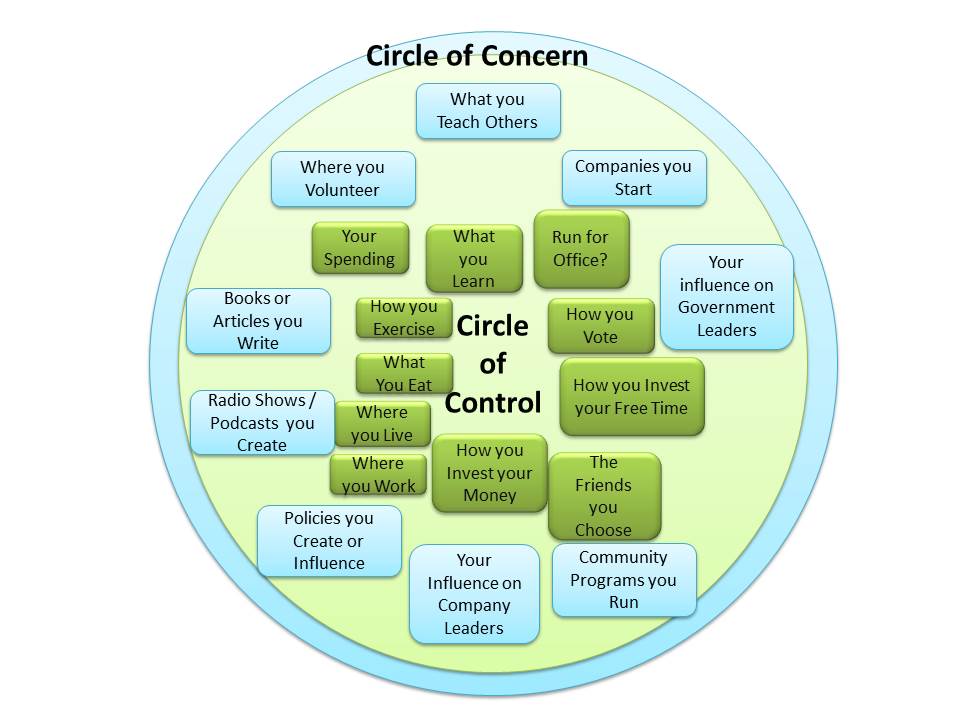 Wow, look at that. The circle of control has really grown! And when reviewing this new more advanced circle, we see that all sorts of  fancy new options have been added in blue. This person, while carefully avoiding the distractions of any of the irrelevant items in red, has gained influence over many more things. And thus things you could once only worry about, are now things you can control. Which is probably what you wanted in the first place.

Therefore, today’s assignment is as follows: over the coming fifty years, monitor both your worries and your words. If you catch yourself leaking out more than a tiny percentage of your personal power on things you cannot personally control, repair that leak. Then find a way to channel that awesomeness to somewhere it will make a difference instead. Watch the results, and write back to me only when you have realized how well it works.