It’s Not a Contest 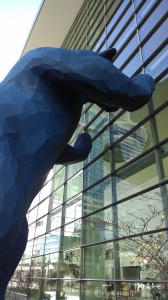 A few weeks ago, I was in downtown Denver at the conference center, as one of the parent volunteers my boy’s the elementary school Robotics Club. We were there to watch an international competition, where kids from around the world had brought along robots they had built to be squared off against each other in various events.

After an exciting drive down to the big city, we stepped off the school bus and made our way though the various bridges and corridors of the gleaming glass facility. When we arrived outside the designated ballroom, we were greeted by one of the teachers from our school district. He addressed our group of about forty kids:

“OKAY GUYS! Before we go in, I wanted to remind you of one thing. There are two types of people in the world today: those who create technology, and those who consume it. Only one of those groups gets to cash the check, the other has to write it. Apple Computer didn’t get to be the richest company in the world by buying a bunch of phones – they had to do the hard work to develop those phones.

So when you go into this room, I want you to look at the teams and where they are from. You’ll notice most of them are from Asia. Because over there, they take this stuff – science, technology, engineering, and math – much more seriously than we do. The kids your age are already starting calculus, and they program their own robots and do events like this every weekend. They are way ahead of us, and in a global world, it’s blah blah blah…”

At this point I tuned out, because I could see where the guy was going. And while his pep talk was meant to be inspirational and he had some valid points, I also think he was missing the bigger picture.

However, I was happy to add this experience to my collection of stories about a common theme these days: the concept of artificially imposed competitive worry.

These scary little talks pop up in all areas of life, and with them we are creating a dog-eat-dog world in the middle of a very comfortable and well-appointed dog food factory.

You’ll see this phenomenon in varying degrees in the school system: At one end of it, my own family has become curious about the hippy free-for-all concept of Unschooling, while traditional schooling methods are more rigorous. And the trend seems to intensify in the Northeastern United States, where many of the wealthier residents are afflicted with Ivy League Preschool Syndrome). Further East, some of the Indian and Asian cultures value education highly, but often under a very strict regime of long hours, reduced leisure, rote memorization and a focus on competition.

Unfortunately this phenomenon does not end on graduation day. The nature of large-scale capitalism is competition and survival of the fittest, which I believe can be a good thing overall*. But when you apply constant competition on the level of individual humans in a win-lose battle, the results are not nearly as good.

Most of us seem to come pre-packaged with a desire for more. If something is good, more of it must be better. A 4-cylinder car provides amazing transportation options, so people naturally try to get more of that amazement by buying 8-cylinder trucks. A few hundred square feet of interior space is a very useful form of shelter, so given the resources some of us will amass tens of thousands of these square feet.

But the phenomenon of more extends even further than material conveniences. It leaks right into the way we live our lives and perceive our value as human beings.

If you enjoy your job, you may find yourself advancing relentlessly until you become the CEO. If you own a business, you might find yourself growing it just because the customers and the money are there and you don’t want to waste the opportunity. If you like jogging, you might start escalating the hobby into being a competitive athlete, and end up spending every weekend training and traveling and getting tendon surgeries without even stopping to ponder if even more running is what was missing from your life.

But what if higher status and accomplishment and higher income were not the things you really needed to achieve a happier life? You would end up trading precious time and life for something that really delivers no value to you, because you had enough in the first place.

Some people call this tendency mindless accumulation. This bad habit is built right into us, as you may have seen in the recent psychological study described in the New York Times. In that rather amazing experiment, researchers found that people were willing to endure annoying noises for far too long, just to accumulate chunks of chocolate that they knew they would never be able to enjoy. This tendency was more prevalent among high-achieving and high earning people like you.

You might think that a fake self-discipline guru like Mr. Money Mustache would be immune to this effect, but unfortunately this is not the case. I still get little thrills every time I earn an extra chunk of unnecessary money, and strive irrationally hard to avoid the pain of losing any of it. People with an even stronger version of this tendency will tend to work in unsatisfying jobs much longer than they need to. Several MMM readers have shared stories in the past about reaching multimillionaire status and yet still feeling compelled to accumulate more. And just to prove they are not that unusual, a 30-year-old described the addictive process that led him to be unsatisfied with a $3.6 million annual bonus. He used the very appropriate term “Wealth Addiction” to describe his condition. The underlying brain chemicals probably function in just the same way as many other compulsive habits.

I find that the tendency to mindlessly heap more onto our plates even occurs with life experiences. I had a very happy life even back in 2011 before starting this blog. As it took off in subsequent years, more opportunities popped up as more wonderful people were brought into my life through the magic of the Internet. There were chances to go on more trips, speak at schools and conferences, meet people for lunches and dinners, write books and make videos.

This all sounds like very fancy stuff – the type of opportunities one should not squander, because they are not offered to everyone. But at the same time, every activity you add to an already-full life means that something has to fall out the other side (unless you can cut out sleep, which unfortunately is not an effective strategy). So I feel opportunities slipping away every day. I see how much more I could get done if only I would work harder and become more efficient at everything.

But then I calm down and remind myself, just as I am reminding you today, that it is not a contest. Life is not a contest, and we get more out of it by cooperating wholeheartedly with each other rather than beating each other’s asses at everything.

The young students should be encouraged to become scientists and engineers if they love the field as I did, but being artsy and creative, insightful and broad-thinking, or optimistic and good with people are equally valuable and rewarding skills. After all, Apple didn’t revolutionize the world of technology by adding more features and buttons than its Korean competitors – it did so by paring things down to a simpler and more human form.

And you and I, as well as our kids, won’t attain the widest smile on our deathbeds by racking up the largest bank balance or longest list of countries visited. This achievement will probably be earned through a more balanced life.

Slow down and take the time to look around you. If you are a chronic lifetime overachiever, give yourself permission to accomplish a bit less. You might just find you are living a bit more.

* Because it weeds out the natural tendency of entrenched power to become complacent and start behaving like old royalty. The fat cats of a big old conglomerate can bribe and lobby for a while, but when deprived of their revenue stream by a younger, nimbler competitor that better serves the needs of customers, the eventual flushing of the toilet is inevitable. Healthy business competition has been happening for quite a while now, and I’m thankful for it.