Necessity Is The Mother of Badassity 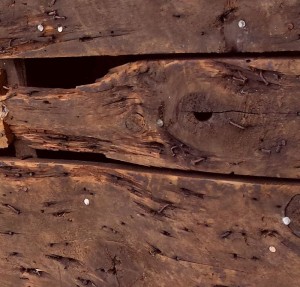 By this point in our conversation, it should be pretty obvious that Badassity is a trait to be treasured and cultivated. Although it is only a fabricated word, the underlying meaning of bold determination and persistence in the face of difficulty is one of the most real and useful tools in the mixed bag of attributes they hand you when you sign up to be a Human being.

Living your life with a properly Badass attitude makes all the difference in the world when it comes to achieving anything worthwhile, or attaining any sort of satisfaction. Without this philosophy, you are stuck perpetually chasing temporary comforts and luxuries and never feeling quite satisfied because there is always more to chase. Your money is drained and yet your heart is never filled. With it, you can properly say “Fuck It” to all of those fiddly details and start getting something done at last.

But our society and its marketing engine work ceaselessly to program this toughness out of us, and offer us pampering instead. You need it. You deserve it. Here, lie down on this table and let us give you a massage and soda. Or maybe you’d prefer a massage table and a soda dispenser built right into your automobile?

You can see the results of this all around you in the types of lives it produces, and you don’t want those results. But perhaps you still find your own badassity to be lacking in some ways. How can you get more of the good stuff?

The answer is sitting right next to you right now. In fact, it’s packed around you as part of the very air you breathe. Because just like Oxygen, junk, household budgets, or any other free-flowing substance, Badassity Expands Automatically to Fill Any Space Made Available to It.

How is it that some people find that life becomes strained to the limit after their first child is born, but then manage to go on to produce and raise several other children simultaneously?

How do some runners that can barely jog out a few blocks go on to finish a marathon less than a year later?

How do some people go from married, affluent lives of comfort, through divorce and perhaps career loss, then rebuild everything from scratch better and simpler than before?

It’s all through the simple fact that these people were faced with a feeling of necessity.

Some of us are self-motivated enough to create this drive out of thin air, but most people need do be dropped into a cold pool of urgency before they respond. Either way, the necessity forced them into action, whether they were ready for it or not. Then they pushed and this action made them tougher, which made the next bit of action all the more effective, and so on. Before they knew it, each had become a badass in his or her individual way, and the benefits began to flow.

Let’s use a recent story to illustrate this principle at work in my own life:

The MMM family showed up here in Canada for our usual summer vacation just a week ago. In keeping with the tradition I call “Carpentourism”, I scheduled some work to allow myself to stay active and help out a few friends and family members at the same time. The big one this year is a replacement of the shingles on my Mom’s 150-year-old house in downtown Hamilton, and a new kitchen inside that same house. Both things have been crying for a rebuild for at least a decade.

Since it is my summer vacation, I figured I would be Mr. Executive Carpenter and make things easy on myself. We arranged for the invincible local rocker (and handyman) known as The Kettle Black to do most of the re-roofing work with the help of my brother and just a bit of guidance from me. Shingles would be delivered to the rooftop right on cue. Meanwhile, the cabinets would be ordered from Ikea well in advance, fully assembled by my equally hard-working mother (who is celebrating her 70th birthday in two weeks), and I would concentrate simply on rebuilding the kitchen, reworking a few electrical and plumbing fixtures and popping in the new cabinets. Piece of cake.

Of course, as with most construction projects in foreign territory, it didn’t go down quite so smoothly.

I secured my brother-in-law’s old VW Golf Diesel and filled it with tools for the 500 km trip from Ottawa to Hamilton. I found that the car had a barely-functional rear hatch, a cassette deck radio, noisy snow tires and broken air conditioning. So instead of my usual roadtrip style of riding in abundant comfort with a custom-crafted MP3 playlist, I had the opportunity to adapt to the vehicle’s 37C (100F) interior temperature and rely on my own singing and Kazoo playing for entertainment. Miraculously, I still arrived at the same destination, and in great spirits and with the benefit of improved heat tolerance. And I was going to need plenty of tolerance. Badassity Through Hardship: Score #1.

That cabinet pre-order never happened, as my Mom’s best efforts were thwarted by the Kafkaesque bureaucracy of IKEA’s kitchen department. We also had to start from scratch on the roofing  – the color and style had been chosen from Lowe’s, but no materials were on site or in stock and the friendly but incompetent staff had no interest in getting them there in a timely manner. It was Wednesday morning and we were ready to rip off the roof, so a delivery the following Thursday would be of no use for us.

The Kettle and I left the Lowe’s parking lot in disdain but immediately noticed a smaller professional roofing shop right across the street. Within minutes of stepping in, the knowledgeable owner had our order completed and scheduled for a next-day rooftop delivery, at $300 less than we would have paid at the big box store. Now we had the roofing materials we needed, and an improved knowledge of how to do roofs in Ontario next time. Badassity Score #2.

So we hit the roof just a few hours later than planned and began to strip the crumbly old shingles, heaving them down into the dumpster. There was only a single layer of them and we were speedy and feeling efficient again. Until the following horrific scene confronted us: 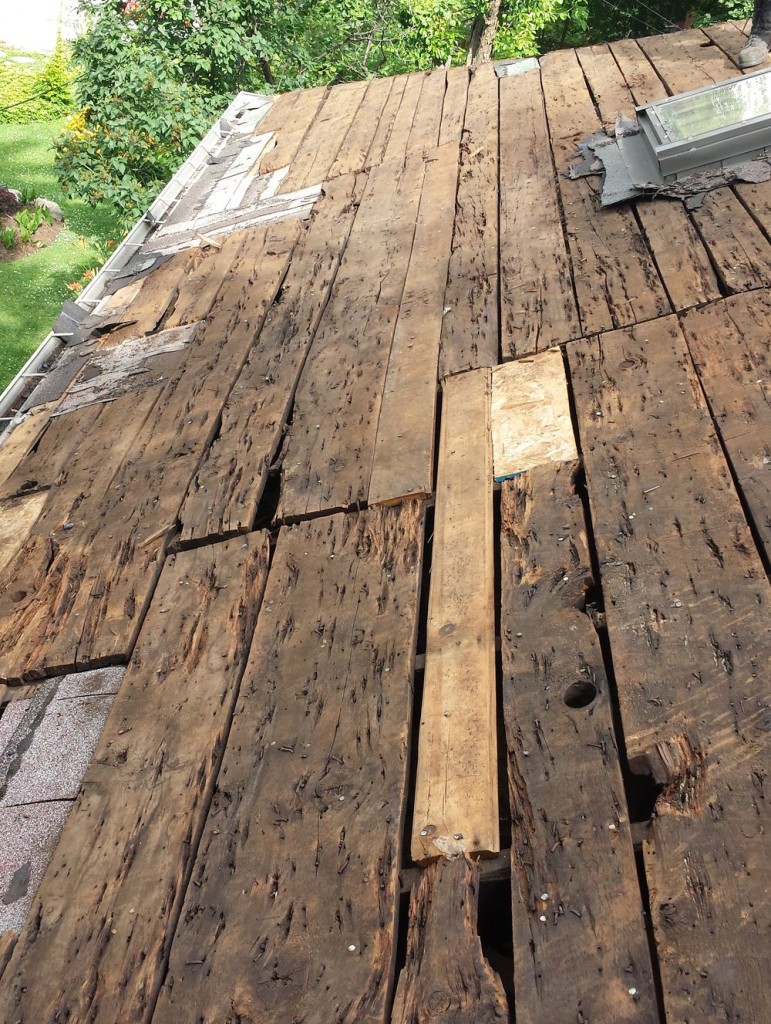 So in other words, when this house was last reshingled sometime in the early 1990s, the previous guy who was obviously completely off his rocker, saw this same expanse of shitty 150-year-old wood and decided “yeah, that looks pretty good. let’s install some shingles.”

So the hardship had returned. We now needed 1400 square feet of 1/2″ OSB to build ourselves a proper roof deck atop this aging expanse of barnyard scrap. That’s 45 sheets, or about 2300 pounds worth, which is not going to fit onto the tiny roof rack of the Volkswagen Golf. And the clock was ticking as this area has a very temperamental climate with frequent torrential summer rainfalls.

I made some telephone inquiries around Hamilton to see if anyone could get it delivered by the next day. No dice. My distant second choice was to make the 10km trip up to Ancaster Home Depot and carry the sheets home in an HD rental pickup truck, so I headed up there at 7PM to avoid traffic. Only to find out that they wouldn’t rent the truck to me since I only carry a Colorado drivers license.

So my mother and I returned the next morning at 7am to catch the store opening and rent the truck in her name. Someone else beat us to it and rented the truck minutes before we arrived, but we were able to secure their van instead. Massive paperwork and delay ensued, but I rallied a forklift and some staff to help fill the van more quickly. I broke the rules and did the driving myself, since my mother had no interest in piloting the 7000 pound behemoth through the downtown streets and backing it into her steep narrow driveway. She did however help me unload the full metric tonne of wood sheets, the Kettle arrived at that moment and we were back on track. After just 6 hours of lifting cutting and nailing in the blazing July sun, our rooftop looked like this: 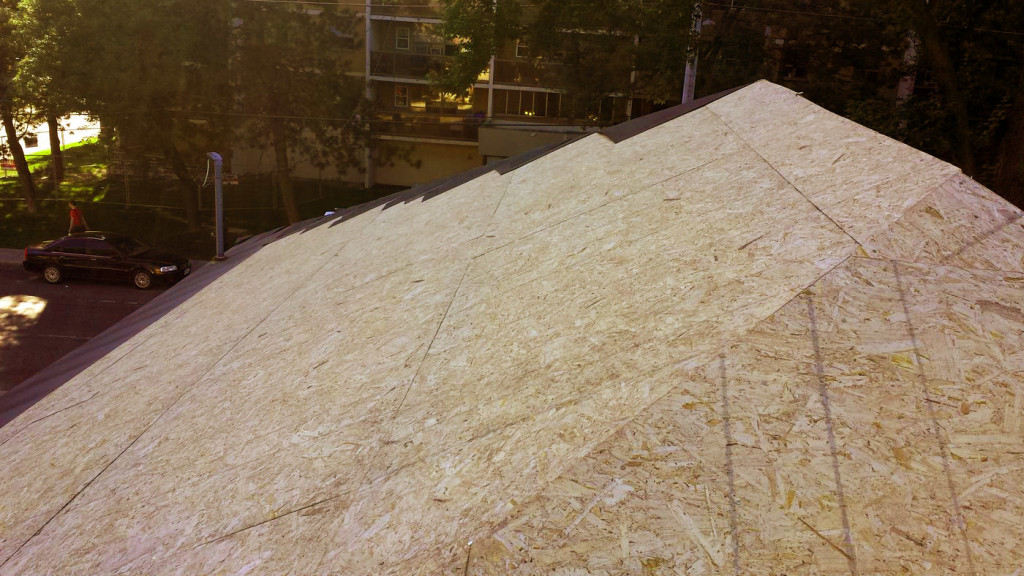 Badassity Score #3: This new OSB roof will permanently improve many aspects of the home’s performance. And the Kettle and I got an incredible day of weightlifting and more practice in production framing techniques as a side benefit.

At this point, we were finally able to get to work on the actual roofing job. Since we both have the same general attitude towards summer construction work (you get up at 6am, eat something, then work as hard as you can until just after it gets dark at 9:30 with occasional pauses only to drink gallons of water and barbecue a few pork chops), this part went quite smoothly.

We finished the thing just in time, at the very end of the fourth evening. The lines were straight and the ridge caps gleamed tidily in the sunset light. I woke up this morning to a heavy rainfall on the properly flashed skylight over my bed, and knew we had been wise to take on this job.

Experiencing hardship and the rewards that come from overcoming it are quite simply what makes life worth living. As an almost-40-year-old with some dough in the bank, I should be seated comfortably in a Lexus and cruising around between the golf courses and restaurants and starting to pile on the pounds and disabilities each year. Instead, I feel better than ever, and the extreme nature of this project coming right at the end of 8 months of construction on my own house has whipped me into the best shape of my life. (Badassity Score #4!)

But I still have much to learn by gaining inspiration from those more badass than me. The Kettle Black just turned 50, and while I went straight to bed after work each day, he went out to the live music venues or worked on his own gigs through the night. 10 years older than me, he looks like this: 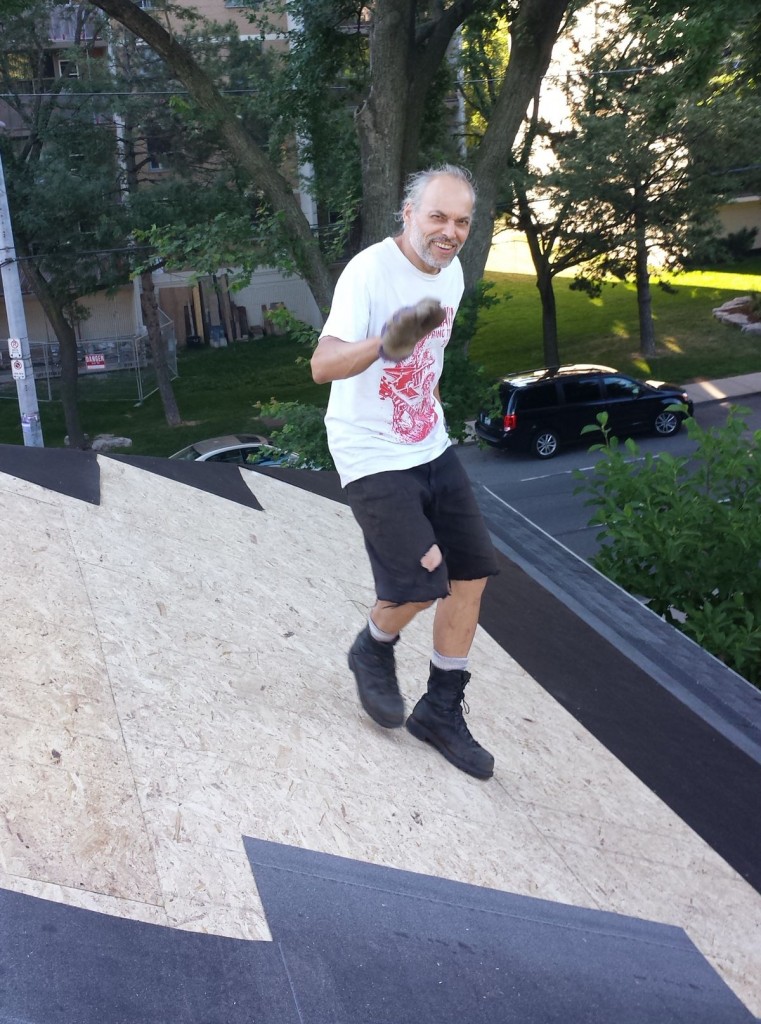 KB: A Canadian Badass at the half century mark

This week’s lesson? Plunge in over your head and do something you’re not quite ready for. With the right attitude, you can only come out ahead.

Previous Post: How to Carry Major Appliances on your Bike Next Post: Is Mr. Money Mustache Ruining Your Marriage?