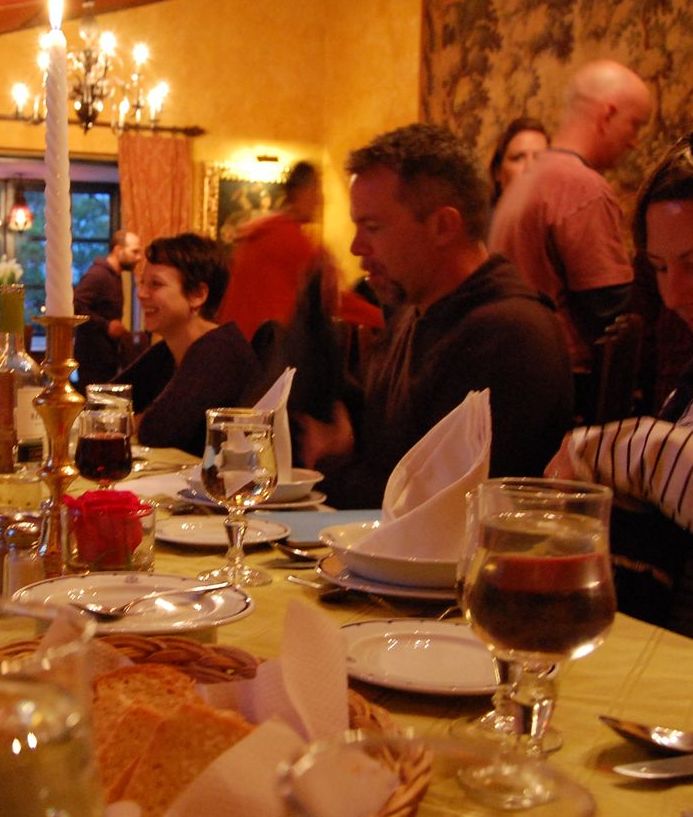 If you and I happen to be in the same town at the same time, we may get the chance to get together. So this page will keep track of some of the fun stuff I’ll be attending in the near future. But that’s just stuff that I will happen to see myself. Over in the forum’s “Meetups” section, individual Mustachian cool people organize stuff all over the place.

What are these meetups like? Usually a group of 10-100 people, standing around, laughing, drinking beer swapping stories about life, work, or bikes. Sometimes they evolve into later nights on the town.

Note to newcomers: Most of these events are free and the more elaborate ones are not, but I never get paid to attend anything myself. I just like a good party with a group of thoughtful people. Hopefully on their amazing rooftop patio

The excuse for this meetup?
(aside from a stellar 77 degree sunny day):

The Longmont Observer, our town’s excellent new non-profit newspaper, is running a fundraiser/meetup there that evening.

With Mustachians being the most well-informed and community-oriented (did I mention good looking and particularly badass as well?) people around, I figured this would be the perfect combination.

Bring a beer or two to share at MMM-HQ, and your bike or jogging shoes if you are in for the pre-party and group ride. Or, just meet us there at Beau Jo’s.

At the Liberty Bar, 1618 East 6th Ave near downtown Austin. 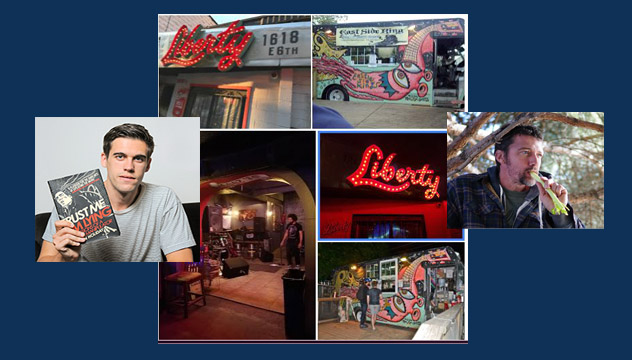 I’ve known about Ryan for a few years, ever since people connected us as mutual fans of the life lessons of Stoicism. I wrote this article about it long ago, and he wrote this bestselling book called The Obstacle is the Way. His writing has also covered a bunch of other interesting topics like the role of Lying in Marketing and most recently Ego is the Enemy (and I think there’s another bun in the oven for imminent release this year).

Since we have wanted to meet for a while, and I happened to have this trip coming up to meet friends in Austin anyway, and I’ve never hosted a meetup in Texas before, we figured we should invite you along as well.

Nothing special or formal, just a bunch of nice people hanging around in a cool neighborhood. Bring your social side and even your business cards if you like, since events like this are about meeting each other, rather than just talking with the hosts.

Small Venue Alert: If there end up being too many of us, we can just spill out into the sidewalk or the nice public square areas right across the street.  Then, peeling off in group to patronize other restaurants and pubs to make a night of it is a highly encouraged tradition.

Invite your Financial Independence Fan friends and hope to see you there!

This was a cool impromptu party – a nice crowd of fun people came out from the Denver region, we had a great time, and did this little Facebook Live Q&A. 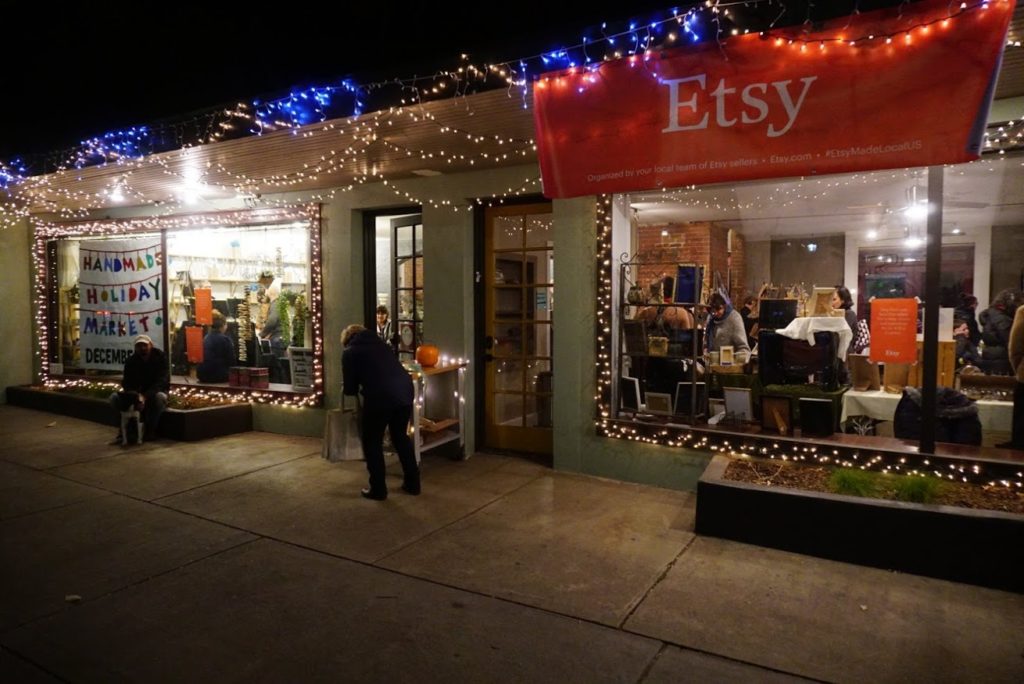 The Headquarters of Mustachianism during a recent winter market. 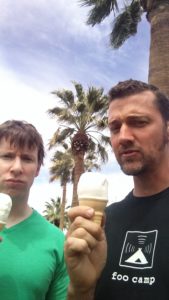 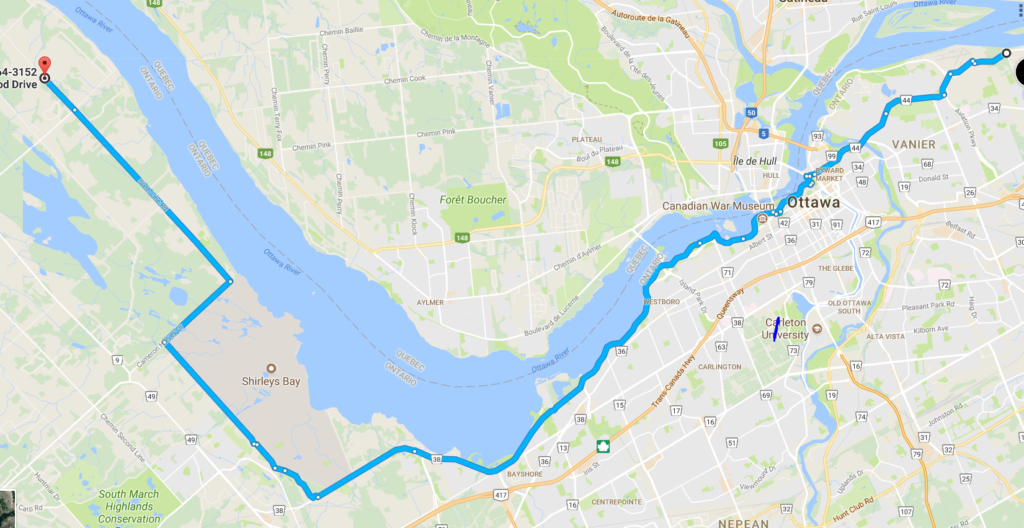 I was staying at the wife’s parents house, and feeling like I needed to cure my laziness. So about twelve of us gathered and rode this great 30 km route along bike paths across town. We ended the event with a big breakfast at the Barley Mow pub and restaurant in Kanata, right across the street from the Newbridge building I worked in as a young lad from 1994-1997.

Then I had to ride and additional 16km alone to reach my sister’s house out in Dunrobin.

Looks like a sunny beautiful evening is on the books – come celebrate on one of Seattle’s most scenic hillsides. 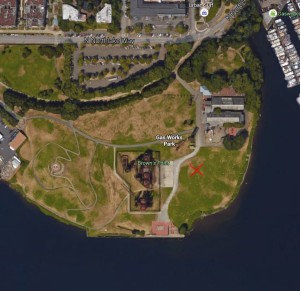 We basked in the wonderful hosting of Treehouse founder Ryan Carson, wheeling 9 pizzas and 110 beers across the street in a shopping cart from the New Seasons Market.

This was a dark and stormy night of sociability and intrigue. About 40 (?) people showed up. We pursued these two purposes:

Purpose #1: To meet other Mustachians who live right here in Longmont.

Toured the currently-stripped building and shared the plans for this future Mustachian Club/Coworking Space. Shared beers to celebrate Tuesday.

Purpose #2: To make the town a better place.

Every Tuesday, our town council holds a meeting in the nearby city hall building. At the beginning of each meeting, citizens get a chance to stand up and talk for 3 minutes.

A solid group of us walked over and joined the meeting, and I delivered my first rant on the microphone to request this:

Make Longmont more People-Friendly
By starting to enforce traffic standards again: Speed, vehicle noise, and on-road safety standards.
And as a parallel but slower effort, bike lanes on every street.

Bonus: This week, they are discussing what to do with the “traffic safety fund”, a nice packet of money collected via sales tax, which could use more direction.

Since was town along with the Mad Fientist and other friends in preparation for Camp Mustache 2016, we repeated the fun we had the previous year in this exceptional location. 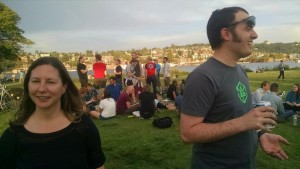 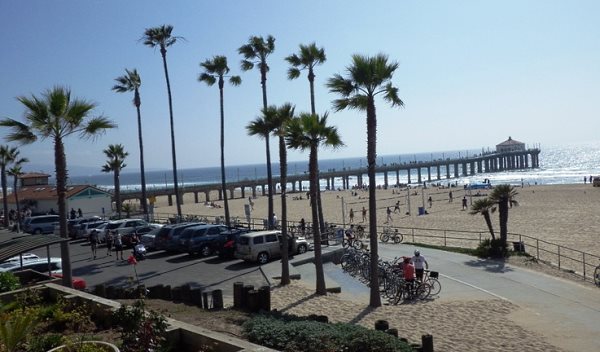 YNAB founder Jesse Mecham, another friend, and I are letting a Tesla Model S self-drive us from Salt Lake City out to LA this week, to check out a company called PeerStreet among other fun business.

Since that company’s office is right on one of the country’s fanciest beaches, and it will be Friday Night, we figured “Hey! Meetup!”

It’s a total no-formalities, zero-planning event. Bring your own fun supplies and ride your bike if at all possible!

Maybe we should start at this spot right here on the sand – easy to find: 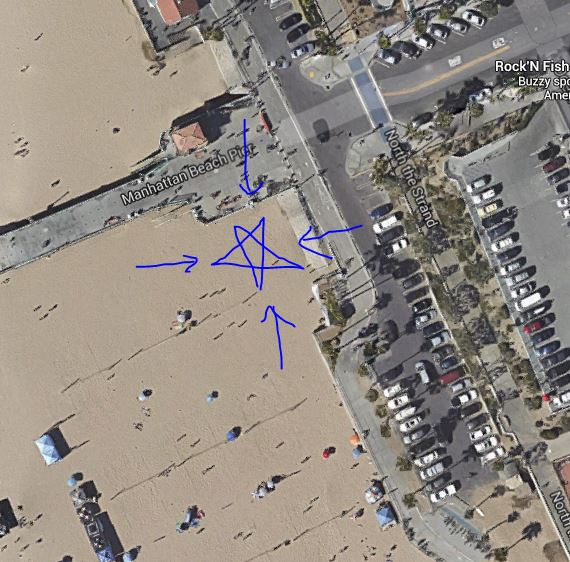 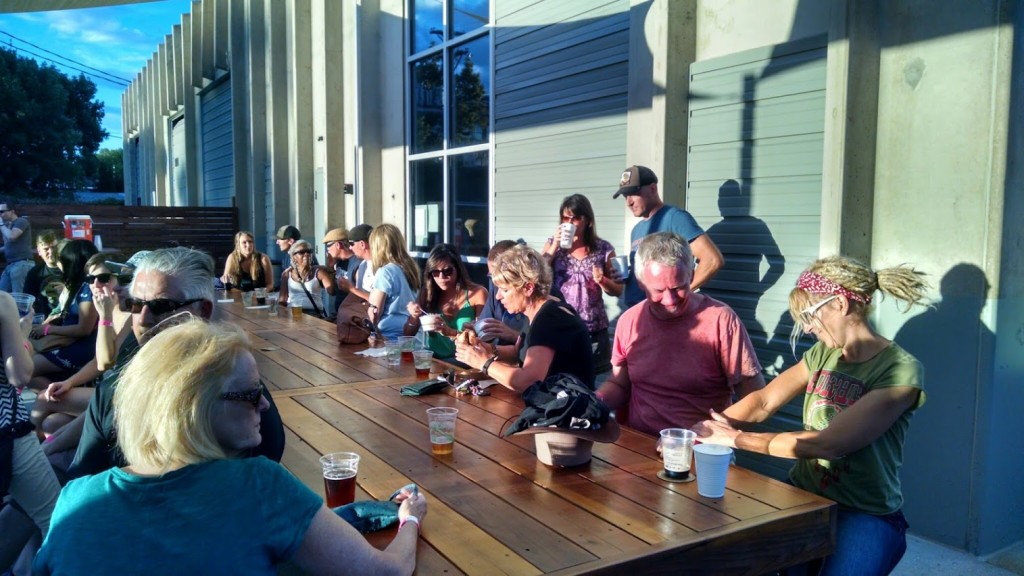 Wibby is the town’s newest craft brewery and a great place to meet because they have a beautiful setup, great beer and loads of space. I think we’ll be back. 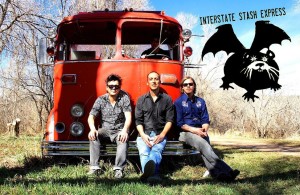 It had been over a year since we gathered in my own town, so we made this one a blowout – over 350 people plus the mind blowing Colorado rockers Interstate Stash Express!

I didn’t make it home from this evening’s festivities until 2:17am, but it was worth it. 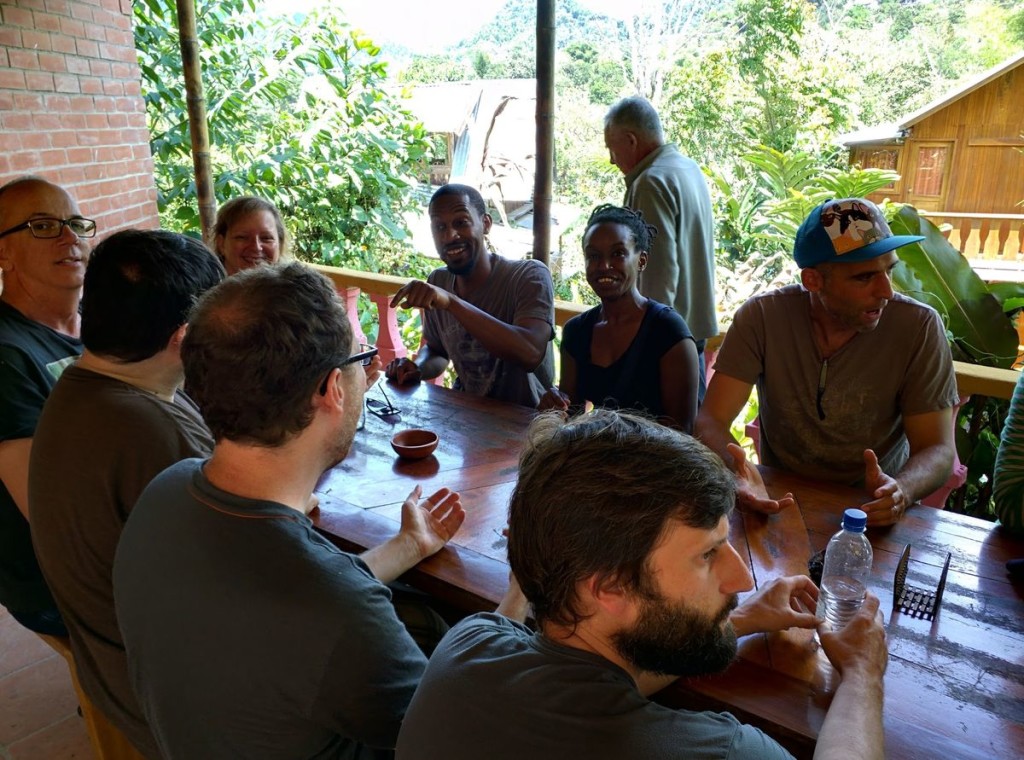 A bit more exotic and unnecessarily expensive than the annual Camp Mustache, these Chautauquas are highlights of the year for many who attend them (myself included).  Imagine meeting 23 other creative, brilliant, interesting, unusual people like yourself and then spending a week together in the beautiful volcanoes and rainforests of Ecuador with good food and drink, and you can see why people tend to get along so well.

In 2015 we did a double header for the first time, where I was a host for one whole event and the first few days of the second. It looks like we are going to do it yet again: planning will probably begin in February 2016 for another October-ish event.

Read more on our host Cheryl Reed’s Above The Clouds website.

Beacon Hill Park from 6:00 PM Onwards – right at #19 on this map. This was a beautiful spot to hang out and although our group of 20 was smaller than usual, the custom Mustache pie someone brought, late night meal downtown, and my 1 hour midnight barefoot walk back to the house made it especially memorable. 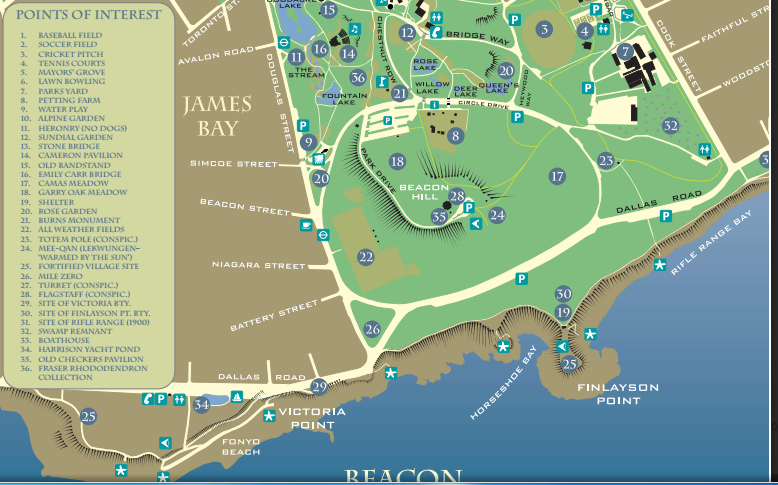 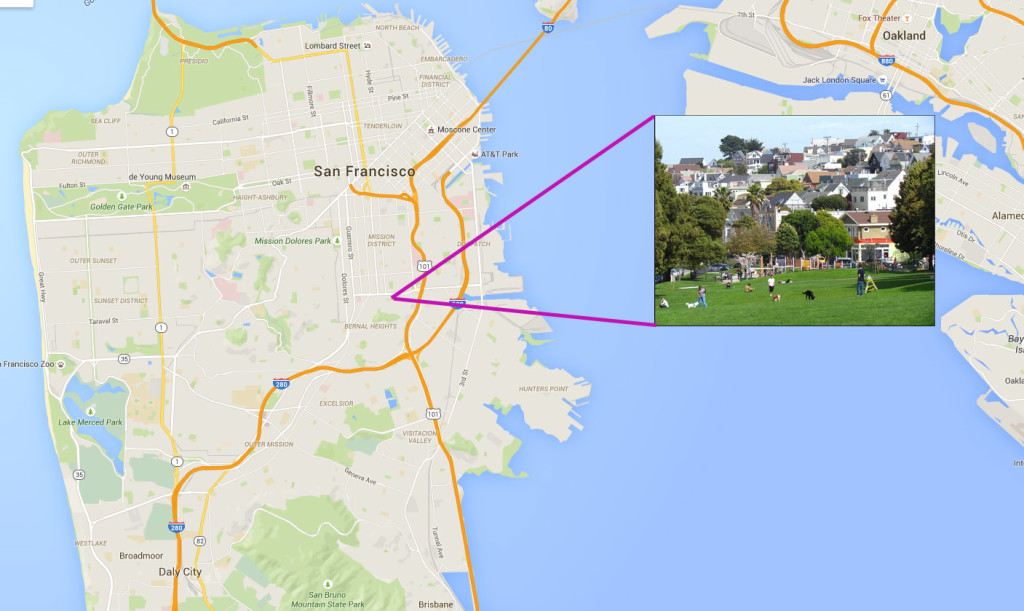 A small park on a round hilltop with butterflies.

A good sized crowd gathered here and I saw some familiar faces from our 2014 SF meetup. The late night survivors and I went out for fried chicken and collard greens afterwards. San Francisco still might be my favorite place. 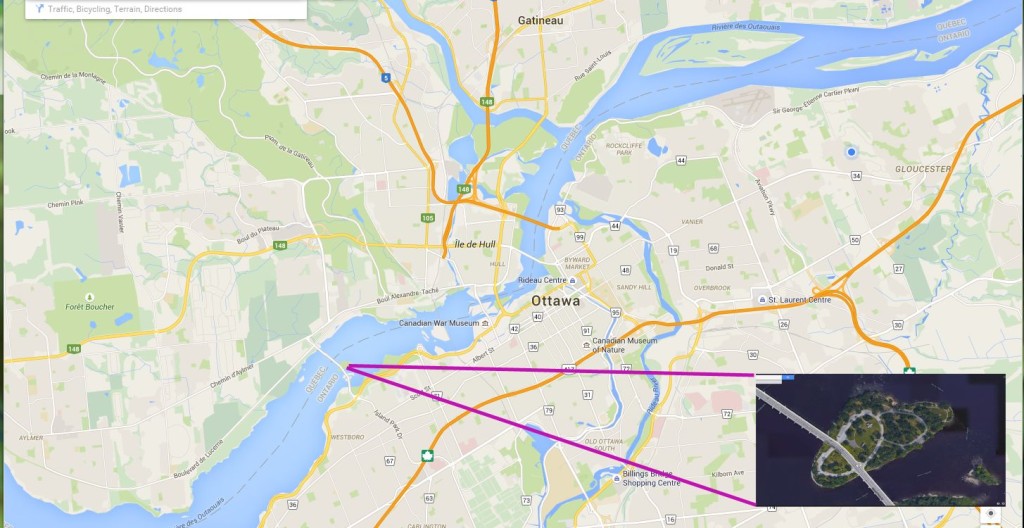 Thanks to our Ottawa man Tristan Hume for suggesting this amazing venue: A beautiful public park that is actually an island in the middle of the Ottawa River. Easily reached from the main bike path or on foot, but it also looks like there is plenty of car parking.

We ended up with a good crowd despite a constant flow of rain. The huge shelter kept us dry and the cops ended up having to kick us out of the park because we blew past the normal 10PM “closing” time. Remember that Canada is a British colony so some of the old rule-abiding and orderliness remains.