The next Stage of Retirement begins: Kindergarten 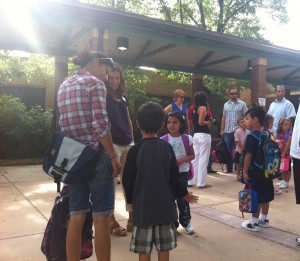 Today is a memorable day in the MMM family, as the Mrs. and I took our precious Junior ‘Stash to start his first day of Kindergarten this morning.

It was a wonderful experience, biking through the early morning’s leafy shade on our streets, and feeling the excitement and fear of the assembled crowd of young kids and their parents as we waited in the school’s courtyard for the opening bell. The simultaneous start of so many school careers, each one destined to play such a gigantic role in forming the future adults. I noticed quite a few shiny cheeks among the Moms, and even a few discrete fingers poking around the periphery of the sunglasses of the Dads.

It’s also a fork in the road of life for an Early Retiree. When our boy was born, we pretty much abandoned any other commitments to take some time to learn to become parents. Even though other parents with multiple kids and simultaneous jobs have it much tougher, we still found it to be quite a challenge*. For the first two and a half years, it was just us and him, with as much family and friends as we could fit in. Baby milestones mixed with years of sleep deprivation and new parent pride. Milk and mushy food, cloth diapers and little clothes, days at the creek and the park.

As the years have crawled past and both parents and child have grown together, we have started taking baby steps back towards traditional adult life. The boy started with one day of preschool per week, the next year it was two days, the next year was three. We started scaling up our part-time work again, and returning to more adventurous family vacations, and even having time for Independent Adult fun. Nowadays,  Mrs. M. goes out alone for a couple hours of crossfit three nights per week, and I’m heading to the mountains for a Gentleman’s Backcountry Camping weekend tomorrow, just as some recent examples.

And now all of a sudden, he’ll be in school five days per week for the next seventeen years or so. We’re still adjusting to this new idea. We celebrated the transition by having breakfast on a restaurant patio near the school and having a serious but fun conversation. What will I do with my days? How will I make sure they are put to good use? Will I get a TV and start watching sports, or perhaps get myself a walker and a golf cart so I can take up Sedentary Golf?

I’m just kidding.. there is actually a huge backlog of stuff to do with this new free time. I want to make my house Energy Independent by adding some solar heat and electricity systems. I want to fix up the gardens and lawns and build some high-end cold frames so I can grow vegetables year-round. I want to ramp up the guitar and drum playing since making music is one of the most basic and Native-style sources of pleasure to me (but for some reason I can only do it in the presence of excessive free time). I want to bike to places around here I’ve never seen, and go through a crazy fitness program like the P90x to force myself to get off the current lazy man’s fitness plateau. I would also like to crank out some profitable local construction projects like doing a classy renovation and resale of an undervalued house on my own street or setting up another rental property. And of course I want to read more books so I can talk through my hat a bit less and quote more respected researchers and authors when I’m dishing out the lessons.

Things like this really do happen in early retirement as long as you write ’em down in an artistic font on a nice piece of paper and stick it on your fridge. Lots of my current favorite hobbies in life (childraising, welding, plumbing, the aforementioned drums) started the same way a few years ago. It’s just that it is now time to take it up a few notches for the next seventeen. Here we go!

*My theory on this is that child-raising is so difficult that it blasts past your previous limits of human accomplishment even after the first one. Just as humans were made to do, you adapt and start doing what it takes. People with more kids, and/or full-time jobs, and/or dealing with poverty simply get even more badass and do even more of whatever it takes. Of course, there are limits to human capacity and both surrounding environments and individual abilities vary widely, so some kids fall through the cracks.. but overall I’m amazed every day at what parents do for their kids. It revives my faith in the ability of humans to accomplish things.