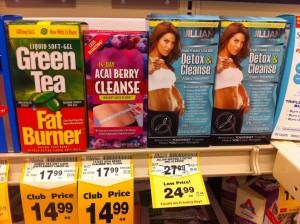 I Love the grocery store, because it is the source of almost all of my food. Under its roof lies a world of unlimited possibilities. It can help me cook up almost any recipe on Earth, and by selecting the right foods and avoiding the wrong ones, I can ensure a fantastic level of health for myself and my family.

But I also Hate the grocery store occasionally, because about 90% of the products in there are pure crap. Colorful boxes and disposable plastic packages containing mostly ridiculous chemicals, colors, and artificial flavors, all mixed over a base of high fructose corn syrup, partially hydrogenated oil, and refined white flour.  These things are big contributors to our country’s startling waistline, and while I believe we should still be free to make, sell, and eat these products at our own discretion, it saddens me to see such incredible effort and environmental resources going into creating things that logically should not even exist.

The grocery store also earns my rage with its ever-tricky pricing scheme. Besides the mental filtering required to seek out that Healthy 10% of items not covered by the previous paragraph, there is also a wildly fluctuating game of price-gouging going on at my store (which happens to be Safeway). Lucerne Organic eggs are sometimes $2.99 for a dozen when they are “on sale”, otherwise they are $4.59 and a competing brand becomes $2.99 instead, or some amount in between. Apples can usually be found for a buck or so per pound, except when you grow complacent and they jack them up to $2.49, resulting in you buying yourself a $15 bag of apples if you aren’t paying attention.  Today I needed tomatoes and they had temporarily risen from 99 cents to $3.99 per pound, so my little handful cost me $5.69! Later I learned there is not a nationwide Tomato Embargo as I had assumed – they are still 99 cents at the other grocery store, but Safeway just decided to give ol’ Mr. Money Mustache the shaft in the name of profit. (But now they’re paying for it in the form of bad PR, aren’t they? Take that, you $3.99-a-pound-chargin’ bitches!)

Know the Right Price: I’ve been the family’s main grocery shopper for years, so I know exactly how much all of my main staples should cost. Interestingly enough, I’ve hit grocery stores all across the US on road trips, and I find the prices are surprisingly consistent across the land. That makes it easy to shop efficiently, even while on vacation. If prices are ever significantly above the “right” range, I discreetly stick up both of my middle fingers, swear under my breath, and move on to a substitute good if possible. Conversely, if prices are below the normal range, I’ll stock up like crazy. For items with a long shelf life, this can lead to some interesting results, like the time I bought 30 jars of Classico pasta sauce because it had dropped from $3.50 to $1.50 per jar, or 20 boxes of Quaker Oat Squares cereal because it had temporarily been marked down from $4.50 to $1.00 per box. The cashiers raised an eyebrow each time, but each of these purchases saved me about $50 over the regular price for these products… and gave me a nice inventory at home to help reduce future trips to the store.

Use Healthiness and Cost Per Calorie to decide what to eat: I love blueberries and raspberries, and they are good for you. But for most of the year, they are ridiculously expensive – as much as $5.99 for a tiny handful in a 4-oz container.  Those 64 calories are costing you 9.35 cents per calorie. To live solely off blueberries at 2000 calories per day, you’d spend $187 per day ($68,255 per year).

On the other hand, I also love old-fashioned rolled oats*. These can be had for about 70 cents per pound in 9lb boxes at Costco. A pound of rolled oats contains 1714 calories – and fantastic ones too, rich in fiber, protein, and iron. This cost per calorie is 0.041 cents. In other words, Blueberries are about 229 times more expensive than Rolled Oats!! If I lived solely on rolled oats at 2000 calories per day, it would cost me 81.6 cents per day to eat, or $298 per year.

Meat is more expensive, for example steak or chicken breast at $5.00/lb for 560 calories yields 0.89 cents per calorie – about 11 times more than the natural peanut butter, which is just as good for you in many ways. Protein, of which I’m a big fan, can easily be supplemented with beans and rice, cheese and eggs, and 6 lb bags of whey protein powder that you can mix into shakes (also from Costco).