Although I talk quite a bit about things like frugality, investing, bicycling, cars, and the ridiculousness of our society, it’s not actually what I think about for most of the day. Mrs. M. and I still consider our main task to simply be child-raising, since it takes more time and energy than the rest of life’s activities combined.

Since I’m sure many of the readers with kids of their own would agree, I thought it would be fun to share some thoughts on the most successful toys that we’ve ever stumbled across, just in case you and your young kids haven’t already discover these things yourselves.

In our household, finding engrossing activities for the little boy is a highly valuable thing: with no TV to turn on for automatic babysitting and a kid who likes a lot of attention, we appreciate the times he gets seriously hooked into some healthy independent play.  We already covered the ultimate outdoor toy (Nature), but there’s still a lot of time spent inside the house that needs to be accounted for. After six years of observing his growth, certain toys and activities have shone above all others so far:

1: A whiteboard and a pack of Colorful Markers 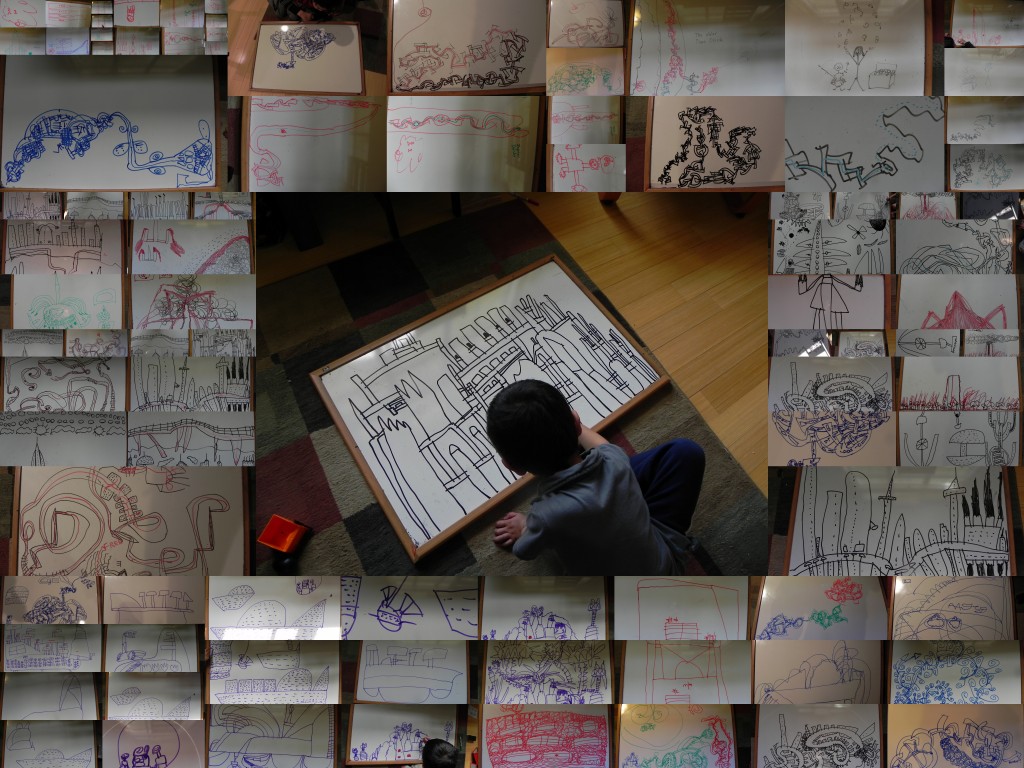 Man Oh Man, has this ever been a successful gift. Several times a day, my son will get the urge to draw, then spend fifteen minutes detailing some elaborate picture, usually involving futuristic cities, vehicles, other planets, or scenes from books we’ve recently read. Then he’ll come to me and ask, “Dada, do you want to ask some questions about my drawing?”. There will be an extended Q/A session, at which point I am instructed to take a picture of the picture so he can safely erase it and begin anew.

Whiteboard drawing can also become a community event. At least once a day, he hosts a “whiteboard war”, where we divide the board in half, draw our bases, and then have a drawing-based battle to the death – usually involving lasers. He always wins, except when battling other kids in which case the outcomes are more controversial.

Over recent years, I have amassed a network folder of THOUSANDS of digital pictures of whiteboard drawings – the collage above is just the tip of the iceberg – a few weeks’ worth at most.  All with one $10 whiteboard and a few bulk packages of markers. The value delivered in fun, drawing and writing skill, and plain old family bonding is immeasurable. 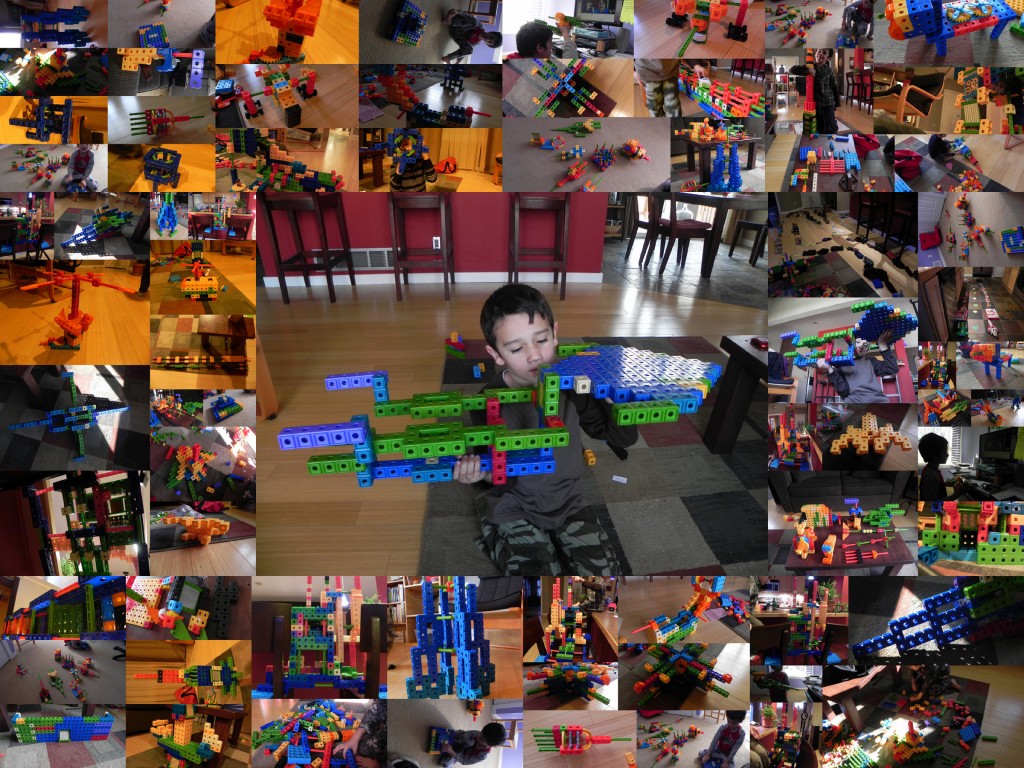 These are like a larger (and more versatile, in my opinion) version of LEGO blocks. With a more positive clicking action, and the addition of “sticks”, which allow a sort of post-and-beam style of construction in addition to regular block stacking, Trio lets you build some seriously massive stuff (our record is a model of the Burj Khalifa Tower, standing just over 12 feet tall and reaching almost to the railing of the second-floor balcony in my living room area).

But unlike Lego, Trio is quite inexpensive. It comes in various packages at Target and other stores, the best value being the general block sets, as opposed to smaller kits designed to make a specific vehicle. I will admit that our little dude is a bit of an extreme Trio Consumer, having spent quite a bit of his own allowance to boost the size of the set – we might have $100 worth of the stuff in total. But that still puts the excellent play time he’s had with it at less than $1 per hour. If you factor in the intuitive knowledge of structural design that this type of play surely provides, it is a highly profitable activity to engage in. 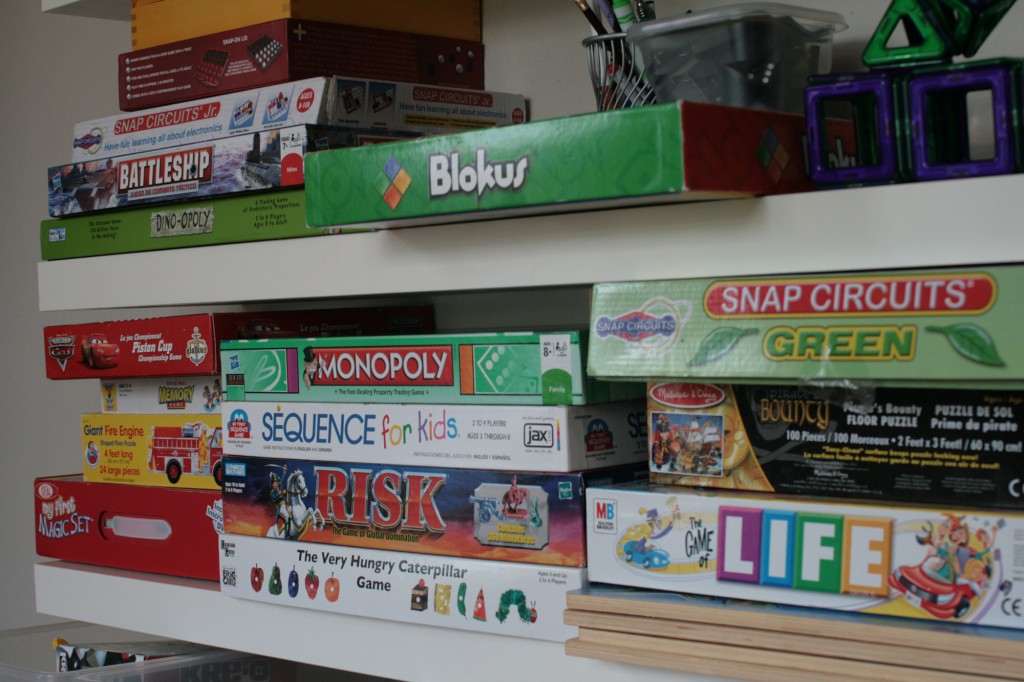 These are a great way to entertain the whole family at once. And while the collection looks huge and cluttery, it’s still reasonably practical because it combines a bunch of games we had from before becoming parents, hand-me-downs, and gifts. Board games are a good way to deflect the Destructive Power of Generous Grandparents – instead of having them buy you things that are absolutely impractical like battery powered plastic noisemakers, you can at least channel some of the generosity into things like games and books that are actually fun to play with for more than a few seconds.

Monopoly has been an unexpectedly educational game – it forces your kid to learn to add the numbers on dice, move delicate game pieces, collect and manage money and make change, budget from limited funds, and even collect and upgrade rental properties and make trades with other players.

The Game of Life, on the other hand, is a simple lesson in Antimustachianism: Go to college – you’re automatically $100,000 in debt! Now pay for a wedding: $25,000! Buy a house and car on credit too! Everything is determined by the roll of the dice, with no personal choice, because that’s how real life is right? Bleah. 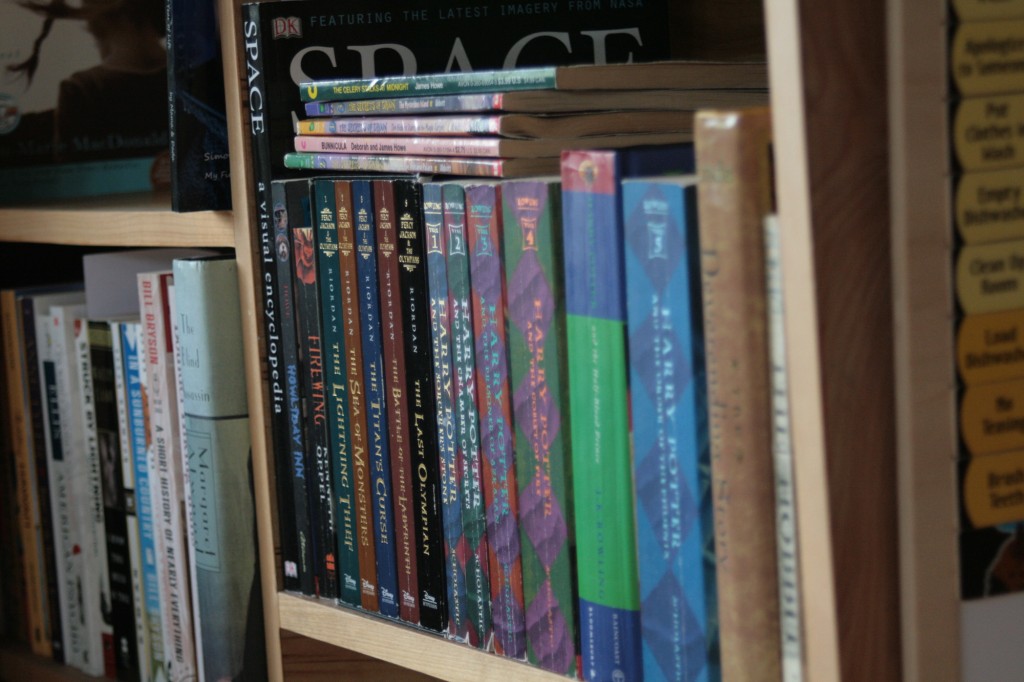 This is an obvious one, but I have really grown to love the cozy escape that reading provides. My mom read to all of her kids much more than what I later learned was normal, and it became such a cherished part of my childhood that I always wanted to carry on the tradition.

When there’s no TV to provide passive relaxation, books become all the more comforting – it’s late in the day, and everyone is tired – too tired to draw on the whiteboard, too tired to make stuff out of trio. So you kick back on the couch and your kid(s) curl up next to you, and the book lets you float off into fantasy land for an hour or two. Blissful!

Books are another good gift deflector: I would not normally buy my own fancy shelf full of kids’ books like I have here, since all the same ones are already available at the library. But family and friends send these books, so we read them while feeling thankful to the gift giver, then eventually re-gift them to another kid or donate them to the library, sharing the fun even further.

The re-gifting thing is quite practical when attending the birthday parties of other kids: no kid really wants a used star wars battery-powered toy, since those things are usually expected to be given in new condition. But they DO enjoy receiving a gift-wrapped box set of great books, with the implicit recommendation of the friend who just finished listening to them as his parents read.

Every kid has different tastes, and even those tastes change as the child gets older. But the toys above have proven to be so golden for so long that I just had to share them with you.

What is the real cost of raising children?
What to Newborn Babies Really Need? (by Mrs. MM)
Avoiding Ivy-League Preschool Syndrome