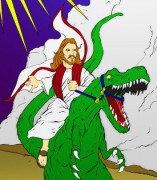 It’s the weekend, and that means Mr. Money Mustache has nothing to say right now. But the MMM reader we all know as Mr. Frugal Toque does! Here’s an interesting rant he sent me a few weeks ago, which I thought would be ideal for this weekend’s guest posting:

There’s a thing that happens to your brain when you watch television and you absorb Consumer Culture directly from its Unholy Altar. Your mind is invaded, pervaded, often left unsated and your thoughts are superseded by the idea that all of this over-the-top marketing is somehow natural.

I received an email today entitled “Tax Software: Only 5 days left of special St. Patrick’s Day savings!” and something struck me as odd. As North Americans, we’ve seen this sort of eye candy so many times in our lives that we’ve grown desensitized to how stupid it is. As a Mustachian who doesn’t have a TV because he somehow forgot to upgrade to an HD receiver, I’ve re-engaged the non-consumer cogs of my reasoning centres just enough for this ad to make me twitch to its stupidity.

And it is stupid. Let me tell you: it is really, really stupid.

Consider the idea of tax software. In Canada and the United States, there is only one time of year in which it makes sense for the vast majority of citizens to purchase such software. The people who market such software have a problem. How can they sweeten the pot? What ultraviolet patterns can they place upon their flowery emails to attract the instinct driven Bumblebees of Consumption?

“Why, of course,” they say, “Let us attach to our flower a four leaf clover, the brand of the nearest holiday.”

But honestly, is it realistic to believe, as a sensible, thoughtful human being, that the purveyors of this software have not carefully analyzed the market and determined the correct price point for their software? Is there any sincerity in this “special deal”?

Of course not. This is the price they mean to set to make their business case. The “sale” is nothing but a gimmick, a drop of green food dye in an otherwise honest pint of ale.

It’s bullshit. It really is.

It was after I made this realization, with many months of non-television watching behind me, that I recalled all of the other holiday based sales: Thanksgiving; New Year’s; Boxing Day; Easter; Valentine’s Day. The list could go on and on. Why should one day be any different from another? Why should anything ever actually be “on sale”? The only real deals are the things they’re getting rid of because no one else would buy them. Everything else is just a trick to get you to think they’re offering a price that’s significantly better than normal.

They might not even be doing it on purpose. Does a flower “know” what it’s doing when it lays out those ultraviolet patterns? Does it feel pleasure at drawing the bee down into its pool of sweet nectar? Of course not. The flower survives because it’s attractive to the bee and the retailers survive because they lay out the patterns that draw in their own Bumblebees.

Don’t be a drone.

Turn off your television. Not just for a day, or a week, but for months. Don’t watch advertisements. Get yourself off all of those electronic mailing lists. All of these are turning you into a drone.

It will take a while, but as you un-program yourself, you’ll begin to see how stupidly the world is run. You’ll begin to scratch your head when you occasion to run across those ads in your everyday life. Their nectar will no long smell as sweet. Their clever patterns will no longer lure you in. You will no longer be a Bumblebee of Consumption.

You will be free, and every lungful of air you inhale will smell as sweet as anything the Consumption Fanatics ever waved under your nose.

Thanks Mr. Toque, and I hope everyone had a great tax season. I for one am greatly relieved that the calculations are done, the bills are paid, and I can look forward to another year of ‘stashing.

Previous Post: Nearly Free Kids Toys that Keep On Giving Next Post: Work Goes On… Long After the Thrill of Workin’ is Gone