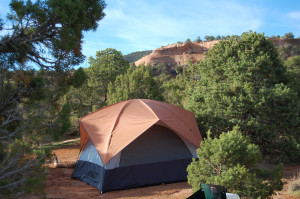 One of the key Principles of Mustachianism is that any and all lineups, queues, and other sardine-like collections of humans must be viewed with the squinty eyes of skepticism. Because if so many people simultaneously decide to do something that they are forced to stand or drive in a queue to do it, there’s a good chance it is something that is not worth doing.

Marketing causes crowds of people to want each new Apple phone on its release day, so those suckers end up in the silly all-night lineups you hear about every year. Black Friday sales are a similar phenomenon.  The 9-5 workday, (combined with poor choices of home and work locations) causes hordes of people to want to drive cars just before 9 and just after 5 every weekday. And thus, these people end up in lines as well.

Herd mentality also makes certain people love certain bands and sports teams, just because they have already become popular with other people. And thus they line up to get tickets and parking spaces at the crowded stadiums.

If I’m planning a car trip through a big city, I’ll plan around the rush hour traffic jams, no matter what. To cross the city of Toronto, you need to plow through 60 miles of highway 401, a road so busy that the daily traffic jam lasts about 18 hours. The only sane conditions are found between 10:00PM and 4:00AM – and so that is when I make my stealthy crossing.

In Colorado, the ski resorts have become so popular that a spectacular lineup forms around each lift chair. A 500-person mob of people waiting and shuffling instead of skiing and snowboarding, is your reward for trying to visit one of these places on the weekend. On top of that, the traffic jam that forms on Interstate 70 on weekend afternoons can turn a one-hour descent back down from the mountains into a six-hour one. But if you stop by on a Tuesday, both conditions are cured.

As a lifelong music-lover, I love to go out and see live music as well.  But this doesn’t mean staying up all night to buy tickets for a sold-out arena to hear a popular band repeat their radio hits. The best music experience for me is seeing insanely talented young musicians play the music they just invented,  in a small venue, where you can shake their hands, say thanks, and buy their CDs from them directly after the show.

“Although several modern dams are higher, wider, and produce more electricity, the Hoover Dam remains the most popular for visitors, hosting millions of visitors every year”. Translation: “We have no idea why so many people are lining up to tour this old thing, but shit, we’ll keep taking the money if you keep giving it to us”.  The pamphlet went on to explain that the popularity is continually reinforced by major movies that feature action at the Hoover Dam as part of their plots (Superman I being my favorite).

So from now on, if you ever find yourself amid a crowd of running sheep, just turn around and run the other way. It can take a bit of dodging at first, but it’s worth it for the much better view.